Are You Okay with Children Being Taught Deviant Behavior in Colorado Schools!

There is a battle raging in Colorado for the very souls of your children. The Colorado House of Representatives recently introduced  HB19-1032, a bill pertaining to Comprehensive Human Sexuality Education.  The bill will be heard before the House Health and Insurance Committee this Wednesday, January 30, at 1:30 p.m.

At a minimum, the proposed legislation would do the following:

Comprehensive Human Sexuality Education is an effort by the radical homosexual lobby to normalize homosexual and other deviant behavior. The rally cry of the homosexual lobby is, “Whoever controls the schools controls the future.” If passed, HB19-1032 would rob Colorado’s children of their innocence by opening them up to immoral and unhealthy practices and teachings. It would condition them to accept inaccurate educational messages of “safe sex” and homosexuality while promoting promiscuity and high-risk sexual behaviors to children as healthy and normal.

Let us pray for the members of the House Health and Insurance Committee by name. Pray they will have the courage to stand up against this very dangerous bill.

Washington, D.C. — Today, Gov. Kasich vetoed the “Heartbeat Bill” in Ohio, which would have outlawed abortion after an unborn baby’s heartbeat could be detected, usually around 6 weeks of pregnancy.  This would have been the most pro-life law in the nation.  The legislature delivered to his desk the Heartbeat bill along with a 20 week pain-capable abortion ban.  The Governor signed only the more moderate bill, vetoing the Heartbeat bill.

Penny Nance, CEO and President of Concerned Women for America (CWA) had this to say:

Gov. John Kasich’s decision to veto the heartbeat bill is extremely disappointing.  We understand there are different approaches to advancing the pro-life cause, but many Ohioans worked extremely hard to pass this legislation.

Gov. Kasich should have signed this bill and let the judicial process play out. He tries to justify his decision by suggesting the legislation would not pass judicial scrutiny. However, it is not his role to act as a member of the judicial branch. It is a shame his veto casts a dark cloud over the victory of the 20-week ban in Ohio.

As a Christian, voting is not just a right; it is a responsibility.  It is imperative that we engage evangelical Christian conservatives in Ohio to get to the polls!

In-person absentee voting begins 35 days before an election and ends at 2:00 p.m. the Monday before Election Day (October 12 – November 7).

What is on the line in this election? The Supreme Court vacancy, national security, national debt, taxpayer funding to the abortion giant, Planned Parenthood, the Hyde Amendment, religious liberty, and more. Getting registered is crucial to make sure your voice is heard on the issues that are important to you.

That said, let’s make sure we get to the polls and encourage our fellow believers to do the same!

Cultivating a Culture of Life … Coast-to-Coast! 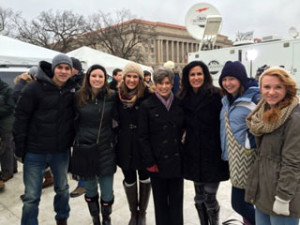 When the laborers are many, we cover an immense amount of field! This past Life Week, Concerned Women for America (CWA) and Young Women for America (YWA) advocated for women and the unborn across the United States. END_OF_DOCUMENT_TOKEN_TO_BE_REPLACED

You are invited to attend an expert panelist discussion on Common Core at Capitol Theater in Columbus.

Common Core is the governmental overhaul of our education system to create national K – 12 standards. Click here to read more about the Common Core State Standards Initiative (CCSI) and why it matters to you.

On Wednesday, April 9, Ohioans and their state representatives and senators will have an opportunity to hear form a panel of the nation’s foremost experts, as they discuss the implication of Ohio’s adoption of Common Core Standards at a special Common Core Forum to be held at the Capitol Theater in Columbus. The forum, which begins at 6:00 p.m., will address the struggles and concerns that parents and teachers are facing under Common Core, as well as the destructive effect the new standards are having on our children.

One prominent concern is that the initiative never went through the legislative process, even though the Common Core standards will affect the education of every child in Ohio. Parents, legislators, local school boards and educators were bypassed and never given an opportunity to evaluate the standards before they became law through ambiguous language inserted in a budget bill. A majority of Ohio lawmakers were unaware of Common Core until parents brought it to their attention in April of 2013, almost three years after the adoption. This includes members of the House and Senate Education Committees.

Ohioans are encouraged to invite school administrators, board members, teachers and state legislators to the forum. State senators and House representatives do not need reservations, as seats will be held for them. For planning purposes, the public must register online for advance tickets (at no cost) at OhioansAgainstCommonCore.com.

If you’re interested in getting involved in a local Prayer/Action Chapter, you can find out more here, or contact Chelsea Patterson at [email protected].

If you wish to preserve local control of education and testing, and you reject the Common Core initiative, Concerned Women for America highly recommends that you attend a critical education hearing at the Ohio State House

Be Sure to Attend the September 17 Ohio Family Lobby Day

Great speakers, great training and it will be a great experience.

Rally With CWA of Ohio for the Boy Scouts of America

Fight for the Honor of the Boy Scots!

Nance: “That young girl could have been any one of our daughters, sisters, nieces, or friends. Send a clear message to the community and society at large that…”

Your prayers and actions are needed.

Consider Attending or Starting Prayer/Action Chapter in Your Area

Find out what a Prayer/Action Chapter is and if there is one in your area.

Urgent Alert on Heartbeat Bill – Ring the Senate Phones Off the Hook!

Call and encourage your friends to call – BEFORE DECEMBER 31

Make plans now to attend and invite a friend!

Enjoy the fun, food, fellowship and phoning on location in Chester or Cedarville. Or, you can assist from your own home. Either way, please join us!

Join us this week on Tuesday, Wednesday and/or Saturday for fun, food and phones!

Ohio: She Votes 2012 Voter ID Calling This Week in Blue Ash, West Chester and Your Own Home

Enjoy the food, fun, fellowship and the satisfaction of making a difference. Please join us and bring a friend!

Nance: “The time is now for women in ‘The Buckeye State’ to stand up and let their voices be heard.”

Get the word out about She Votes 2012 with these convenient push cards.