No Planned Parenthood question.  Need I say more?  One of the most gruesome, shocking, hot topics of the day – a human rights crisis, and the prime time hosts decide not to bring it up.  Instead they decided to go to the left’s talking points, asking about rape, incest or health of the mother on the issue of abortion. 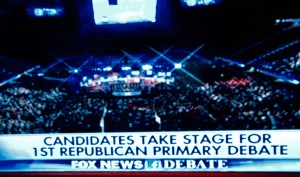 WALKER: Well, I’m pro-life, I’ve always been pro-life, and I’ve got a position that I think is consistent with many Americans out there in that in that I believe that that is an unborn child that’s in need of protection out there, and I’ve said many a time that that unborn child can be protected, and there are many other alternatives that can also protect the life of that mother. That’s been consistently proven.

I’ve got a position that’s in line with everyday America.

On same-sex “marriage” also, Gov. Mike Huckabee had to correct the bizarre framing of the question:

HUCKABEE: Chris, I disagree with the idea that the real issue is a constitutional amendment. That’s a long and difficult process. I’ve actually taken the position that’s bolder than that.

A lot of people are talking about defunding planned parenthood, as if that’s a huge game changer. I think it’s time to do something even more bold. I think the next president ought to invoke the Fifth, and Fourteenth Amendments to the constitution now that we clearly know that that baby inside the mother’s womb is a person at the moment of conception.

The reason we know that it is is because of the DNA schedule that we now have clear scientific evidence on. And, this notion that we just continue to ignore the personhood of the individual is a violation of that unborn child’s Fifth and 14th Amendment rights for due process and equal protection under the law.

It’s time that we recognize the Supreme Court is not the supreme being, and we change the policy to be pro-life and protect children instead of rip up their body parts and sell them like they’re parts to a Buick.

Then, there was the God question.  There are no words to describe it, so here it is: “I want to know if any of them have received a word from God on what they should do and take care of first.”  The candidates tried to do what they could with it.  Here is how Senator Ted Cruz responded:

I’m the son of a pastor and evangelist and I’ve described many times how my father, when I was a child, was an alcoholic. He was not a Christian. And my father left my mother and left me when I was just three years old.

And someone invited him to Clay Road Baptist Church. And he gave his heart to Jesus and it turned him around. And he got on a plane and he flew back to my mother and me.

There are real differences among the candidates on issues like amnesty, like Obamacare, like religious liberty, like life and marriage. And I have been proud to fight and stand for religious liberty, to stand against Planned Parenthood, to defend life for my entire career.

And I will be proud to continue to do so as president of the United States.

The question was amended a bit later, maybe after the hosts notice the awkwardness:

MODERATOR: Senator Rubio, I want to ask you the same question. But I do want to mention, a woman just came here to the stage and asked, what about the veterans? I want to hear more about what these candidates are going to do for our nation’s veterans.

So I put the question to you about God and the veterans, which you may find to be related.

RUBIO: Well, first, let me say I think God has blessed us. He has blessed the Republican Party with some very good candidates. The Democrats can’t even find one.

And I believe God has blessed our country. This country has been extraordinarily blessed. And we have honored that blessing. And that’s why God has continued to bless us.

And he has blessed us with young men and women willing to risk their lives and sometimes die in uniform for the safety and security of our people.

Unfortunately today we have a VA that does not do enough for them. I am proud that last year we helped change the law. We changed the law to give the power to the VA secretary the ability to fire any executive that isn’t doing their job.

And it is outrageous they’ve only fired one person to date. When I’m president of the United States, we’re going to have a VA that cares more about our veterans than about the bureaucrats who work at the VA.

The biggest laugh of the night goes to Gov. Mike Huckabee who said this in closing:

HUCKABEE: It seems like this election has been a whole lot about a person who’s very high in the polls, that doesn’t have a clue about how to govern.

A person who has been filled with scandals, and who could not lead, and, of course, I’m talking about Hillary Clinton.

He got a big laugh from everyone.  And concluded strongly:

I think America is in trouble, but it’s not beyond repair. But it’s going to take leadership who sees the greatness of this country, and who believes that once again we can be one nation, under God.

I’ll be my best to do that, and thank you for your support.

Finally, in conclusion Ted Cruz had to force many of the issues we would have love to hear more about, like the defunding of Planned Parenthood:

CRUZ: If I’m elected president, let me tell you about my first day in office. The first thing I intend to do is to rescind every illegal and unconstitutional executive action taken by Barack Obama.

The next thing I intend to do is instruct the Department of Justice to open an investigation into these videos and to prosecute Planned Parenthood for any criminal violations.

The next thing I intend to do is instruct the Department of Justice and the IRS to stop persecuting religious liberty, and then intend to cancel the Iran deal, and finally move the U.S. embassy in Israel to Jerusalem.

I will keep my word. My father fled Cuba, and I will fight to defend liberty because my family knows what it’s like to lose it.

Wish we’d had more of that, as we did in the first debate earlier.

–
Read more posts like this on the Legal Blurb Blog on CWA’s Legal Studies Page.