By Mario Diaz, Esq.August 6, 2015News and Events, Sanctity of Life

The first debate of the Fox News/Facebook presidential debate, featuring the candidates who did not make the top 10, is now over.  If you missed it, you missed a great shaming of Planned Parenthood in light of the recent stomach-churning undercover videos showing how the organization profits from the sale of aborted babies’ hearts, brains, lungs, etc.

Here are the top five moments of the candidates discussing Planned Parenthood: 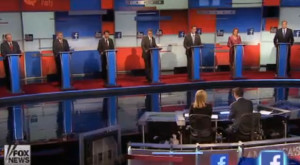 MODERATOR: Next question on the U.S. Supreme Court. It’s been 42 years, Senator Santorum, since Roe v. Wade, and many consider, in this country, to be a case of settled law.

SANTORUM: It is not any more than Dred Scott was settled law to Abraham Lincoln, who, in his first inaugural address, said, “It won’t stand.” And they went ahead and passed laws in direct contravention to a rogue Supreme Court.

This is a rogue Supreme Court decision, just like Justice Roberts said. There is no constitutional basis for the Supreme Court’s decision, and I know something about this.

Abortions being done where the baby’s being delivered first, to preserve those organs, and then they crush the skull. Well, the Supreme Court found a bill that I was the author of unconstitutional.

What did I do? I didn’t stop. I didn’t say, “Oh, well we lost. It’s the law of the land.” We worked together. The House and Senate, under my leadership, and we passed a bill, and we said, “Supreme Court, you’re wrong.”

We’re a co-equal branch of the government. We have every right to be able to stand up and say what is constitutional. We passed a bill, bipartisan support, and the Supreme Court, they — they sided with us.

Sometimes it just takes someone to lead and stand up to the court.

MODERATOR: Governor Pataki, you’re the only pro-choice candidate running. A Republican holding that position has not won a single primary in 35 years. With the recent Planned Parenthood videos that we have all seen, shedding new light on abortion practices, I know that you have said that you would defund Planned Parenthood?

MODERATOR: But has this story changed your heart when it comes to abortion?

PATAKI: My heart has not changed, because I’ve always been appalled by abortion. I’m a Catholic; I believe life begins at conception. But as Bill said earlier, Roe v. Wade, it’s has been the law for 42 years, and I don’t think we should continue to try to change it.

But what we can do is defund Planned Parenthood, and by the way, put in place an absolute permanent ban on any taxpayer dollars ever being used to fund abortions. Also, when you look at these videos, they are horrific and show just a hideous disrespect for life. What else we can do is that we should believe in science.

PATAKI: You know, Hillary Clinton’s always saying how Republicans don’t follow science? Well, they’re the ones not listening to the scientists today, because doctors say that at 20 weeks that is a viable life inside the womb. And at that point, it’s a life that we have the right to protect, and I think we should protect.

So, I would pass legislation outlawing abortion after 20 weeks. It is Hillary; it is Biden; it is the others who insist on allowing abortion well into viability, and that should be stopped.

III. Bobby Jindal sends a message to Planned Parenthood; they don’t want him as President:

JINDAL: Well, a couple of things. Planned Parenthood had better hope that Hillary Clinton wins this election, because I guarantee under President Jindal, January 2017, the Department of Justice and the IRS and everybody else that we can send from the federal government will be going in to Planned Parenthood.

This is absolutely disgusting, and revolts the conscience of the nation. Absolutely, we need to defund Planned Parenthood. In my own state, for example, we launched an investigation, asked the FBI to cooperate. We just, earlier this week, kicked them out of Medicaid in Louisiana as well, canceled their provider contract. They don’t provide any abortions in Louisiana.

But in terms of shutting down the government, I don’t think President Obama should choose to shut down the government simply to send taxpayer dollars to this group that has been caught, I believe, breaking the law, but also offending our values and our ethics.

It is time for Republicans in D.C. to fight. Too often, they give up; they negotiate with themselves. They said they would get rid of the unconstitutional amnesty. They didn’t do that. They said they would repeal Obamacare if we gave them the majority. They didn’t do that either. They said they’d shrink and balance the budget. They haven’t done that. Absolutely, they should fight to fund — defund Planned Parenthood, and I don’t think the president should shut down the government simply to send our taxpayer dollars to this group.

MODERATOR: Lindsey Graham, this conversation will no doubt go to the war on women, and that cutting funding to this group could be a very broad brush against all of you or anybody who will hold this nomination as being against women’s health, against these organizations that people will say provide positive things for many women.

GRAHAM: I don’t think it’s a war on women for all of us as Americans to stand up and stop harvesting organs from little babies. Let’s take the money that we would give to Planned Parenthood and put it in women’s health care without having to harvest the organs of the unborn. The only way we’re going to defund Planned Parenthood is have a pro-life president.

You want to see a war on women? Come with me to Iraq and Afghanistan, folks. I’ve been there 35 times. I will show you what they do to women. These mythical Arab armies that my friends talk about that are going to protect us don’t exist. If I am president of the United States, we’re going to send soldiers back to Iraq, back to Syria, to keep us from being attacked here and keep soldiers in Afghanistan because we must.

I cannot tell you how much our nation is threatened and how we need a commander in chief who understands the threats to this nation.

If you’re running for president of the United States and you do not understand that we cannot defend this nation without more of our soldiers over there, you are not ready for this job.

FIORINA: Hillary Clinton lies about Benghazi; she lies about e- mails. She is still defending Planned Parenthood, and she is still her party’s frontrunner. 2016 is going to be a fight between conservatism, and a Democrat party that is undermining the very character of this nation. We need a nominee who is going to throw every punch, not pull punches, and someone who cannot stumble before he even gets into the ring.

I am not a member of the political class. I am a conservative; I can win this job; I can do this job; I need your help; I need your support. I will, with your help and support, lead the resurgence of this great nation.

Read more posts like this on the Legal Blurb Blog on CWA’s Legal Studies Page.