Why doesn’t every persecuted group get a flag at US embassies? 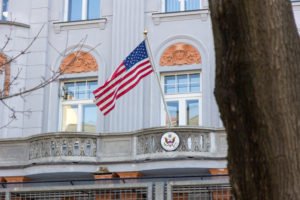 June is designated LGBT Pride Month, and rainbows are displayed on everywhere from T-shirts to restaurant chains to the Uber app. Even with all the gay pride flags, parades, and recognition the LGBT community receives in the U.S. during June, the Left is still not satisfied. They demand that the rainbow flag be flown over U.S. embassies abroad.

Look at this practice that’s been in place since the Obama administration — President Barack Obama actively promoted the LGBT community not just domestically but also internationally through the U.N., State Department, and U.S. Agency for International Development.

We should all agree that addressing human rights abuses around the world must be a central tenet of U.S. foreign policy. But why is one group singled out and others ignored?

Click here to read the rest of this op-ed as featured in the Washington Examiner.