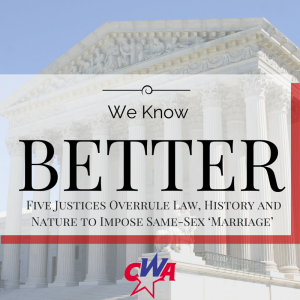 From a legal standpoint, the majority opinion in Obergefell v. Hodges, the recent U.S. Supreme Court opinion that invented a right to same-sex “marriage,” is simply embarrassing.  I am not exaggerating.  After I concluded reading Justice Anthony Kennedy’s opinion’s strongest argument based on the “Due Process” clause of the Fourteenth Amendment, I thought I was missing pages!

I was not.  And the rest of the opinion did not get any better.  In an e-mail commenting on Kennedy’s opinion, noted legal scholar and president of the Ethics and Public Policy Center, Ed Whelan, said, “I haven’t tried to excerpt Justice Kennedy’s majority opinion, as I don’t know how to extract a core from a balloon of gas.”  He is not exaggerating either.  There is no “there” there on this opinion. It’s truly remarkable.

Although happy about the ultimate result, proponents of same-sex “marriage,” including the four other justices joining him (Justices Ruth Bader Ginsburg, Stephen Breyer, Sonia Sotomayor, and Elena Kagan) cannot be particularly thrilled with Kennedy’s nebulous reasoning — if it can be called that.  I’m frankly surprised there were no concurring opinions.

After his Due Process discussion, Kennedy moves on to claim Equal Protection requires a finding of a constitutional right to same-sex “marriage,” but there is no legal discussion about it, only some metaphysical pontifications of fairness and dignity. What was he thinking?

The majority does not seriously engage with [the Equal Protection] claim. Its discussion is, quite frankly, difficult to follow. The central point seems to be that there is a “synergy between” the Equal Protection Clause and the Due Process Clause, and that some precedents relying on one Clause have also relied on the other. Absent from this portion of the opinion, however, is anything resembling our usual framework for deciding equal protection cases. (Citations omitted.)

Justice Antonin Scalia wrote in his own dissent that, “[T]he Court ends this debate, in an opinion lacking even a thin veneer of law.” He also wrote:

The opinion is couched in a style that is as pretentious as its content is egotistic … the opinion’s showy profundities are often profoundly incoherent. “The nature of marriage is that, through its enduring bond, two persons together can find other freedoms, such as expression, intimacy, and spirituality.” (Really? Who ever thought that intimacy and spirituality [whatever that means] were freedoms? And if intimacy is, one would think Freedom of Intimacy is abridged rather than expanded by marriage. Ask the nearest hippie …

Scalia concludes, “The stuff contained in today’s opinion has to diminish this Court’s reputation for clear thinking and sober analysis.”

Indeed. Whether you like the ultimate outcome or not, this opinion is excruciatingly hollow.

Whatever the case, here is a good-faith attempt at explaining the Court’s “reasoning,” apart from its plain desire to reach the desired outcome.

As if it helped his case, Justice Kennedy starts the opinion by emphasizing the importance of marriage.  “[M]arriage is essential to our most profound hopes and aspirations,” he writes. He quotes Confucius and Cicero, who regarded marriage, children, and families as the foundation of society.  But none of that has anything to do with the definition of marriage.

On the contrary, all throughout history, for a “millennia,” as Kennedy acknowledges, marriage has been codified in law as the union between one man and one woman.  Still, he was unfazed.  He writes, “The Constitution promises liberty to all within its reach, a liberty that includes certain specific rights that allow persons, within a lawful realm, to define and express their identity.” Identity expression, according to the Court, is paramount to anything else and, for homosexuals at least, it can only be achieved by marriage.

The Court is certain of this because it apparently rejects the idea that someone can come out of the “gay” lifestyle. Kennedy writes that, “[T]heir immutable nature dictates that same-sex marriage is their only real path to this profound commitment.”  The Court’s gratuitous promotion of homosexuality’s “immutable nature” is, of course, insulting and demeaning to the many ex-gays from which the Court heard, who “chose to change their sexual orientation and now live in opposite-sex relationships despite having been previously deeply entrenched in same-sex relationships.”

But they are completely ignored by the Court. Homosexuals cannot change, it claims.  Marriage is important. They deserve it.

Justice Samuel Alito put the Court’s Due Process argument succinctly: “[T]he Court holds that the term ‘liberty’ in the Due Process Clause of the Fourteenth Amendment encompasses [the right to same-sex “marriage”].  The big problem for the Court is, of course, that nothing of the sort is required by the text which says merely that no state shall “deprive any person of life, liberty, or property, without due process of law.”

The Court, therefore, has to invent the right to same-sex “marriage” through a legal concept that allows it to read new “fundamental rights” into that provision, something it calls “Substantive Due Process.” Kennedy writes:

The generations that wrote and ratified the Bill of Rights and the Fourteenth Amendment did not presume to know the extent of freedom in all of its dimensions, and so they entrusted to future generations a charter protecting the right of all persons to enjoy liberty as we learn its meaning.

But this again does not help the case Kennedy is trying to make at all.  The question is how does he translate that to mean that unelected judges get to make that determination, instead of what the Tenth Amendment expressly provides, that “The powers not delegated to the United States by the Constitution, nor prohibited by it to the States, are reserved to the States respectively, or to the people.”

This is what Justice Kennedy had said in the last marriage decision, striking down the Defense of Marriage Act, but now he feels differently.

The Court identifies four principles that it believes compels it to find a constitutional right to same-sex “marriage:”

It is interesting that Kennedy feels compelled to throw in the “two-person” qualification into his analysis, for some unknown reason.  Why does he feel comfortable discriminating against people who simply love two or more people?

Chief Justice Roberts noted how his reasoning inevitably opens the door for polygamy:

One immediate question invited by the majority’s position is whether States may retain the definition of marriage as a union of two people. Cf. Brown v. Buhman, 947 F. Supp. 2d 1170 (Utah 2013), appeal pending, No. 14- 4117 (CA10). Although the majority randomly inserts the adjective “two” in various places, it offers no reason at all why the two-person element of the core definition of marriage may be preserved while the man-woman element may not. Indeed, from the standpoint of history and tradition, a leap from opposite-sex marriage to same-sex marriage is much greater than one from a two-person union to plural unions, which have deep roots in some cultures around the world. If the majority is willing to take the big leap, it is hard to see how it can say no to the shorter one.

The Court doesn’t address it, because it has no way of addressing it.

Nor does it address the most glaring error on its lack of legal analysis: the fact that in order to recognize a fundamental right under Substantive Due Process, it must recognize a right, “so rooted in the traditions and conscience of our people as to be ranked as fundamental.” To try to argue same-sex “marriage” is deeply rooted in our traditions is so preposterous, Kennedy doesn’t even try.  Yet, he feels perfectly comfortable ignoring clear Supreme Court precedent in order to bring “dignity” to LGBT individuals.

Perhaps sensing the inadequacy of its Due Process argument, the Court throws in an Equal Protection claim that doesn’t go anywhere.  The Chief Justice again: “Absent from this portion of the opinion, however, is anything resembling our usual framework for deciding equal protection cases.”

Kennedy is really concerned about policy, not law.  This is the real explanation of his ramblings.  He wrote: “Were the Court to uphold the challenged laws as constitutional, it would teach the Nation that these laws are in accord with our society’s most basic compact.”

What? That is an inquiry that is appropriate for a legislature. The Court should be concerned with the text of the Constitution and its application to state laws that define marriage between one man and one woman, not the impact of any particular public policy.

Finally, it must be emphasized that religions, and those who adhere to religious doctrines, may continue to advocate with utmost, sincere conviction that, by divine precepts, same-sex marriage should not be condoned. The First Amendment ensures that religious organizations and persons are given proper protection as they seek to teach the principles that are so fulfilling and so central to their lives and faiths, and to their own deep aspirations to continue the family structure they have long revered. The same is true of those who oppose same-sex marriage for other reasons.

That’s it.  He basically says, “Don’t worry about it” to one of the most pressing problems facing our nation after this lawless decision.  He should tell that to former Atlanta Fire Chief Kelvin Cochran, or Richard and Betty Odgaard, or Barronelle Stutzman, or Elaine Huguenin. We could go on and on. And the cases will only multiply exponentially after Justice Kennedy’s reckless actions.

The majority graciously suggests that religious believers may continue to “advocate” and “teach” their views of marriage. The First Amendment guarantees, however, the freedom to “exercise” religion. Ominously, that is not a word the majority uses. Hard questions arise when people of faith exercise religion in ways that may be seen to conflict with the new right to same-sex marriage—when, for example, a religious college provides married student housing only to opposite-sex married couples, or a religious adoption agency declines to place children with same-sex married couples. Indeed, the Solicitor General candidly acknowledged that the tax exemptions of some religious institutions would be in question if they opposed same-sex marriage. There is little doubt that these and similar questions will soon be before this Court. Unfortunately, people of faith can take no comfort in the treatment they receive from the majority today. (Citations omitted).

I hope you don’t miss what the Chief Justice of the Supreme Court of the United States is telling us.  We can find no (zero) comfort from the words of the Court on religious liberty.  On the contrary, their purposeful misuse of words in lieu of “exercise” of religion should be cause for alarm to us all.

This decision is a disaster for American jurisprudence and American culture. The warning signs do not get clearer than this. When the Constitution can be disregarded so blatantly, we have no constitution. We must wake up before it is too late.

—
Read more posts like this on the Legal Blurb Blog on CWA’s Legal Studies Page.