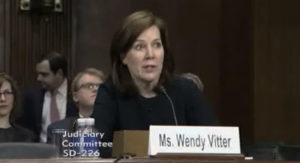 You can add another chapter to the left’s escalation of anti-Christian bigotry. Right on the heels of bigoted attacks against Russell Vought and Amy Barrett, the left is once again imposing its unconstitutional religious litmus test against judicial nominee Wendy Vitter, who has been nominated to the U.S. District Court for the Eastern District of Louisiana.

Vitter is General Counsel of the Roman Catholic Archdiocese of New Orleans and, as with Barrett, the fact that she would actually believe in the Catholic Church’s teaching on abortion is unacceptable to the left.

Such a religious test is explicitly prohibited in the U.S. Constitution by Article VI, Section 3. It reads, “[N]o religious test shall ever be required as a qualification to any office or public trust under the United States.”  But this is exactly what the left is imposing on any person who dares disagree with them on the issue of abortion.

They are absolutely hysterical about a statement Vitter made that, “Planned Parenthood says they promote women’s health. It is the saddest of ironies that they kill over 150,000 females a year. The first step in promoting women’s health is to let them live.” The figure is a reasonable estimation, given the fact that Planned Parenthood’s latest report says it performed 321,384 abortions overall.

Vitter was questioned over and over about her religious beliefs, and she was clear. “I am pro-life. I will set aside my religious or my personal views. My personal views in this role, I need to make a conscious effort and will do so to set this aside,” she answered to Sen. Richard Blumenthal (D-Connecticut) as he pressed her on the issue.

But the left is ready to explode; they will never accept that. They simply cannot allow any person of faith (who actually believes the church’s teaching) to have any position in public life.

This bitter development recently prompted Cardinal Timothy Dolan, the Archbishop of New York, to write a powerful Wall Street Journal op-ed titled, “Democrats Have Abandoned Catholics.” The bishop lamented the Democrats’ refusal to support Rep. Dan Lipinski (D-Illinois) because he is pro-life, among many other things.

This video from when they tried the same tactic against the nomination of Justice Neil Gorsuch will suffice:

Every senator from both the left and the right should stand against the left’s cry for a religious litmus test on nominations. The swift confirmation of Vitter would be a good start to making that clear.