Update: Georgia Attorney General Back Off Demand for Sermons.

Thank you for your phone calls and e-mails made last week to Gov. Nathan Deal and the Attorney General’s office concerning the ludicrous demands that Dr. Eric Walsh turn over copies of his sermon notes and transcripts to the State of Georgia. Because of public pressure, the Attorney General withdrew their request for Dr. Walsh’s sermon notes and transcripts!

While this was a huge victory, there is still work to do! The demand that Dr. Walsh turn over his sermon notes and transcripts was only one of five egregious requests on the part of the state against its own citizen. As was pointed out by First Liberty Institute’s Senior Counsel Jeremy Dys at the October 26, 2016 press conference, the State of Georgia is also demanding that Dr. Walsh submit the following:

This invasive request by the State of Georgia (even though the state claims that Dr. Walsh was not fired on religious grounds) is a disturbing display of injustice, intolerance and outright government overreach into the sacred life of a pastor. The state’s actions in this case are reminiscent of the sort of “monitoring” the great German pastor Dietrich Bonhoeffer experienced in his time. We must demand an immediate end to this type of anti-religious bigotry on the part of state authorities.

If you made calls last week, please call again. Gov. Deal and Attorney General Carr must hear from you!

Pray that Gov. Deal and the Attorney General will be God-fearing and recognize that they are accountable to Him for each decision and act. “The fear of the Lord is the beginning of wisdom: and the knowledge of the holy is understanding.” Proverbs 9:10

Recommended Event: “We Stand With God” 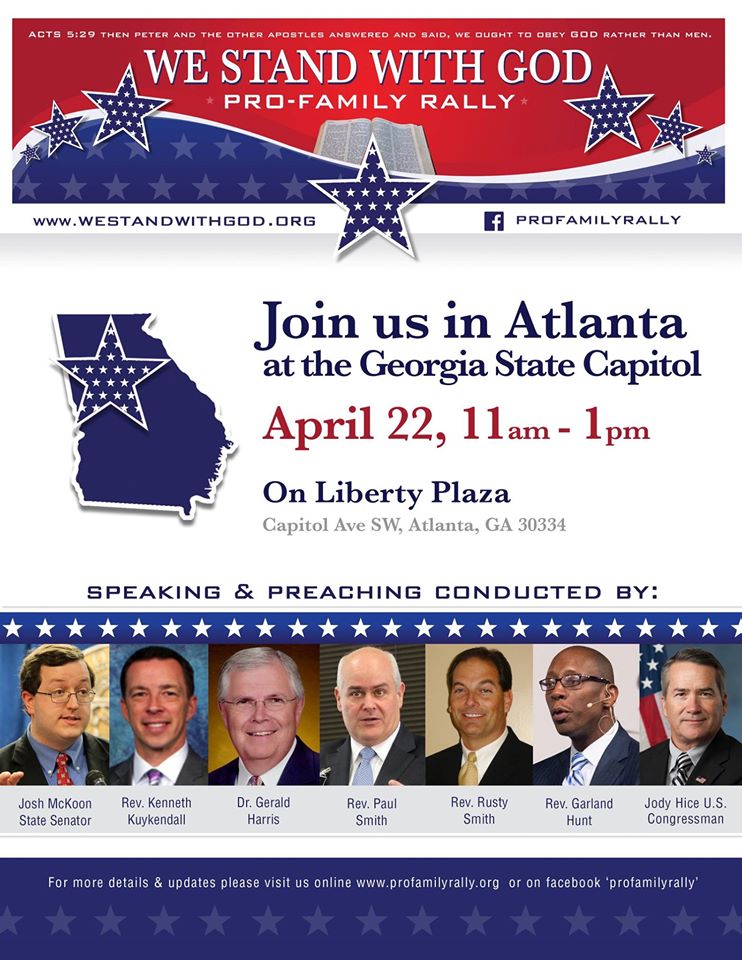 Gov. Nathan Deal held a press conference this morning to declare that he is going to veto the religious freedom bill, HB 757, the Free Exercise Protection Act.  Click here to read CWA of Georgia’s press release.

In response to Gov. Deal’s threat to veto the legislation, a press conference is planned for Tuesday, March 29, 2016, at 10:30 a.m. on the South side of the second floor of the State Capitol.  CWA of Georgia will join other faith leaders and pastors to discuss the veto and a call to action.  Click here for media advisory alert.

Please make every effort to attend!

Latest news: 5-22-15
The Georgia GOP passes resolution in support of SB 129. We are waiting for the GaGOP to post the resolution.

The legislative session wrapped up on Thursday, April 2.  Here is a short synopsis for SB 129:

Educate yourself on the need for a state Religious Freedom Restoration Action in Georgia. Read through the resources provided by below.

Pray that our state legislators, Speaker, Lt. Governor, Speaker of the House and Governor will stand on the side of religious liberty and not buckle to the pressure of corporations who do not see the need to pass a religious liberty bill.

Religious Liberty is one of CWA’s seven core issues on which we focus our efforts. CWA is concerned about the trend of government to diminish and disregard the God-given inalienable rights of individuals, and are working to see our government strengthen and renew its commitment to respect and protect each individual’s exercise of his God-given inalienable rights. Click to read more.

CWA of Georgia is supporting efforts by State Representative Sam Teasley (R-Marietta) and State Senator Josh McKoon (R-Columbus) to pass legislation that provides religious liberty protections for people of all faiths living in Georgia. As a reminder, the effort to pass similar legislation in 2014 was met with vicious opposition by Georgia-based corporate giants such as Delta, UPS, Coca-Cola and Home Depot. The companies bought into the media hype and misinformation, and used their lobbying power to kill the bills.

SB 129 passed out of the Senate and is now in the House.  By all appearances, it looks like Rep. Wendell Willard, chairman of the House Judiciary Committee, is trying to run out the clock on the bill. There are only ten days left in the state legislative session, which means SB 129 needs to be heard in committee IMMEDIATELY.

Please call Chairman Willard’s office on Thursday, March 19, and respectfully urge him to allow SB 129 to be heard in the standing subcommittee chaired by Rep. Barry Fleming no later than Friday, March 20.

Subject: Light Up the Switchboard for Religious Liberty!

The Georgia State Senate passed SB 129, the “Georgia Religious Freedom Restoration Act” by a vote of 37-15.  SB 129 now moves to the House where it will face a tough battle. We are asking everyone to help light up the State Capitol switchboard by making two phone calls this week:

Religious freedom is the bedrock of all other liberties and valued as one of our most cherished constitutional rights.  Protecting religious freedom was so important to our Founders they placed it at the top of the list of the Bill of Rights. Isn’t it time that we step up to protect religious freedom here in Georgia?  Future generations are depending on us. Contact your state legislators today and urge them to stand on the side of religious freedom and support SB 129.

Save the date! Religious Freedom Rally – Let the Followers of Christ Arise!

Join believers from around the state and rally for religious freedom!

We cannot sit quietly any longer.  We cannot remain passive in the face of a government that acts as if religious faith must remain within the walls of the church building on Sunday. Our nation was founded on the principles of freedom and the free exercise of religion has always been recognized as an active, vibrant part of all society.

You will need an ID to enter the Capitol.

Please take your stand for the righteousness of God to be alive and active in the public square.

Click here for more information on this issue of religious liberty, and to watch a video about the legislation, click here.