Congratulations! Your support and engagement have now helped confirm Justice Amy Coney Barrett to the United States Supreme Court. She was just confirmed by a vote of 52-48 and sworn in by Justice Clarence Thomas. What a picture of hope for our country to see her raise her hand and take her oath from another constitutionalist at the Court.

Our Women for Amy Bus Tour is rejoicing! I want to thank those of you who took the time to come out to rally in support of Justice Barrett. We have a few more stops still, and they are bound to be the most joyous ones yet, as we celebrate this amazing victory.

Your engagement in this nomination will bear fruits for generations to come. Justice Barrett is not only a woman of great faith, integrity, and commitment to the Constitution, she is also now the youngest member of the Supreme Court.

This is a historic day for conservative women. Justice Barrett is an inspiration to millions of young conservative women who are witnessing a prime example of someone who reached the highest pinnacles of her profession without compromising her values.

But the task ahead will not be easy for Justice Barrett. The pressures will only increase as she takes her new position at the Court. So, let me encourage you to continue to keep her and her family in your prayers.

And remember to stay connected with us here at ConcernedWomen.org as we continue to stand together for freedom and justice in our land.

Washington, D.C. – The United States Senate just confirmed Judge Amy Coney Barrett to the United States Supreme Court by a vote of 52-48. . Penny Nance, CEO and President of Concerned Women for America Legislative Action Committee (CWALAC), had this to say:

“The conservative women I have been visiting all across the country in our ‘Women for Amy’ Bus Tour cheer loudly for this historic milestone for women.  Judge Barret is an inspiration to millions!

“A conservative, constitutionalist, pro-life woman at the Supreme Court is why we voted for Donald Trump. We congratulate Justice Barrett, and we are praying for her and her family. The task ahead will be a difficult one, but we have full confidence in her abilities as a jurist.

“We must also recognize the incredible job done by Senate Majority Leader Mitch McConnell and Judiciary Chairman Lindsey Graham in cutting through the usual Washington antics and making sure Judge Barrett was given a fair confirmation process. This was not a given. The opposition tried to derail her, even though they knew she was more than qualified for the job. They opposed her for political reasons. But Senate leadership and Republicans in the Senate went to bat for the American people, and they delivered. A job well done.

“But ultimately, we must get back to the source of such a great addition to the Supreme Court: President Donald J. Trump. He has surpassed all our expectations when it comes to judicial nominations, and he has indeed delivered on making the judiciary great again.

“Americans will remember that going into this important election.” 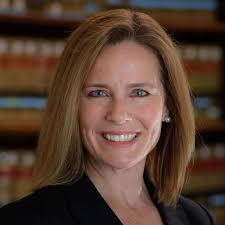 Penny Nance: “Conservative women across the country celebrate this victory over the religious bigotry of Democrats.”

Washington, D.C. –  In light of the Senate vote today to limit debate on the Supreme Court nomination of Judge Amy Coney Barrett, leaders of the Women for Amy Bus Tour eagerly anticipate a vote on her confirmation Monday evening.

Penny Nance, CEO and President of Concerned Women for America Legislative Action Committee (CWALAC), made the following statement as she sets off on the final leg of the twelve-state Women for Amy Bus Tour.

“On the eve of the vote to confirm Judge Amy Coney Barrett to the United States Supreme Court, conservative women across the country celebrate this victory over the religious bigotry of Democrats. We applaud Senate Republicans for treating Judge Barrett with respect and moving ahead with her confirmation, despite the Democrats’ resisting their constitutional obligation on political grounds.

“Judge Barrett has demonstrated she has the skills, temperament, and qualifications to serve on the Supreme Court, yet Democrats are fighting her confirmation every step of the way.

“For a party that claims to promote the empowerment of women, Democrats are showing their true colors; they only support women who agree with their political ideology. All others are free to be treated with contempt, as they have done to Judge Barrett.”

This week, the Women for Amy Bus Tour makes stops in Texas and Arizona. For more information on the tour, please go to: https://concernedwomen.org/women-for-amy/

Washington, D.C. – This morning, after Democrats opted to boycott the vote, the United States Senate Judiciary Committee voted favorably to send Judge Amy Coney Barrett’s nomination to be an associate justice of the United States Supreme Court to the full Senate.

Penny Nance, CEO and President of Concerned Women for America Legislative Action Committee (CWALAC), had this to say, as she continues to lead the Women for Amy Bus Tour, currently traveling from McAlester, Oklahoma, to Fort Worth, Texas:

“Conservative Women all over this country are energized by the nomination of Judge Barrett to the Supreme Court; we are seeing it first-hand. They are celebrating her with every step she takes, against the tide, to trace her own path to the highest court in the land. What an inspiration she is to millions of young girls watching today. She gives us hope!

“We applaud Senate Republicans for treating her with respect and moving ahead with her confirmation, despite the Democrats’ temper tantrums. They should be ashamed of disrespecting this highly qualified nominee by not even showing up for blatant partisan political reasons. She deserves better.

“But they prove, once again, that they are not the party that promotes and respects women’s rights. They only support women who agree with their political ideology. All others are free to be treated with contempt, as they have done to Judge Barrett today.

“The good news is that, at the end of this process, they too will have to address her Justice Barrett, no matter the theatrics they employ today.”

“Conservative women are eager to support Amy Coney Barrett’s confirmation. We’ve had amazing turnout on our first day of supporters who recognize that history is going to be made by the confirmation of the first constitutionalist conservative woman on the Supreme Court. We can’t wait to meet more supporters in the coming weeks.”

Kelly Loeffler from Georgia was in attendance for our Atlanta bus stop.

Senator Lindsey Graham, Committee Chairman of the Senate Judiciary, joined the bus tour in South Carolina by telephone. He said, “She’s the best person that President Trump could have possibly chosen. Amy has led a very consequential life in the law. She’s a good person. This is a big deal for all of us. … This is our time, and we’re going to seize the moment”

By Penny Nance | Barrett, CEO, News and Events | No Comments

“2020 is the year of conservative women where we see the first constitutionalist conservative woman nominated to the Supreme Court. Amy Coney Barrett is an outstanding role model for our daughters. She is a mother of seven, a wife, smart, compassionate, and a hard-working woman of faith. I am looking forward to meeting with and educating conservative women across the country showing our support for Amy Coney Barrett and affirming that she is indeed the right one to be confirmed to the highest court in the land.”

Provided below are confirmed states on the “Women for Amy” Bus Tour.

**DUE TO COVID-19 Restrictions, members of the media must PRE-REGISTER to attend this event.