President Donald Trump was masterful last night in his State of the Union Address. He was humble. He stood to the side, so to speak, even as he was emphatic about his first-year accomplishments and allowed Americans to shine. The stories he presented, the people he highlighted, the families he honored were the story of the night. He summed up the year through them.

“We saw the volunteers of the Cajun Navy racing to the rescue with their fishing boats to save people in the aftermath of a totally devastating hurricane. We saw strangers shielding strangers from a hail of gunfire on the Las Vegas strip. We heard tales of Americans, like Coast Guard Petty Officer Ashlee Leppert, who is here tonight in the gallery, with Melania.” 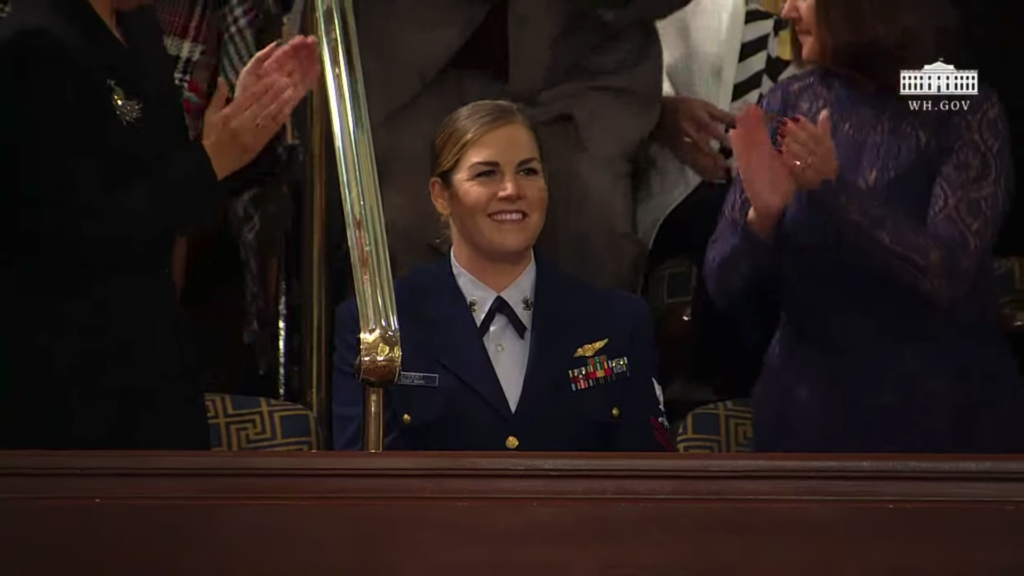 He highlighted small business owners Steve Staub and Sandy Keplinger who just had their best year ever in 2017. 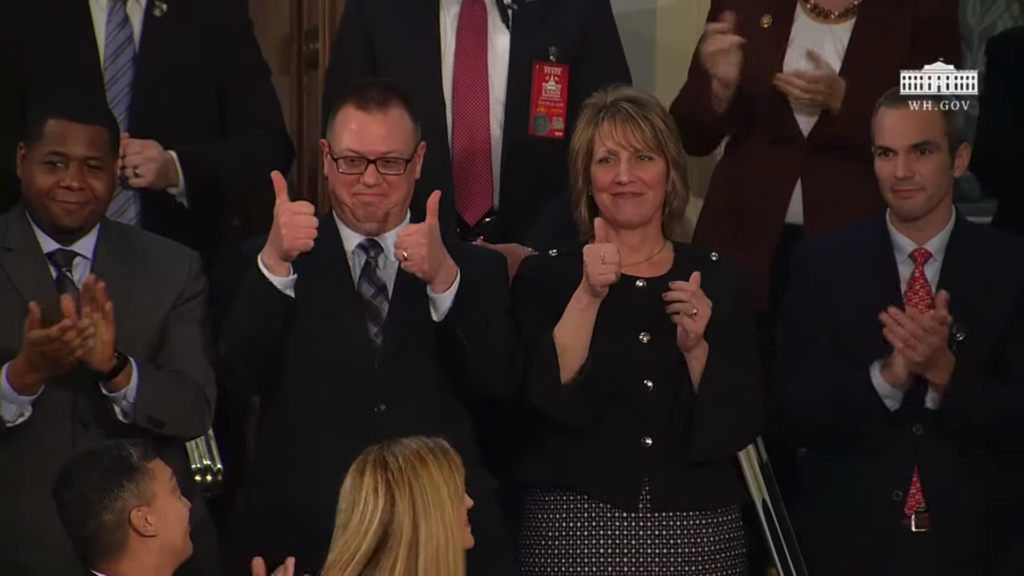 Along with them, President Trump honored one of their workers, a simple hard-working American who embodies the American dream. Corey Adams, “a great welder”, who supported himself through school and is using the extra money he will get through tax cuts to buy a home. 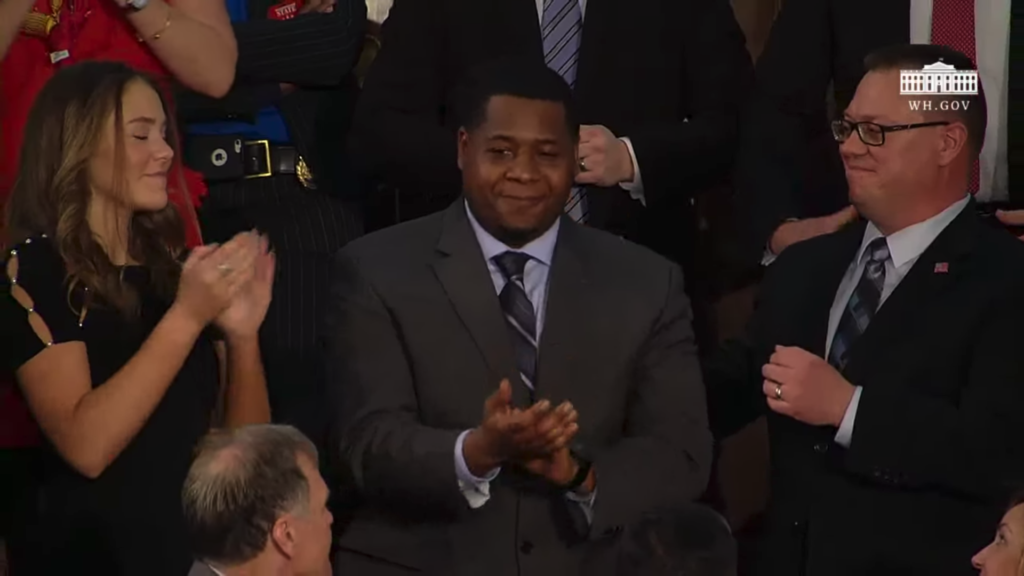 There was the Homeland Security Investigation Special Agent, Celestino Martinez, who has served for fifteen years, fighting against dangerous gangs like MS-13. 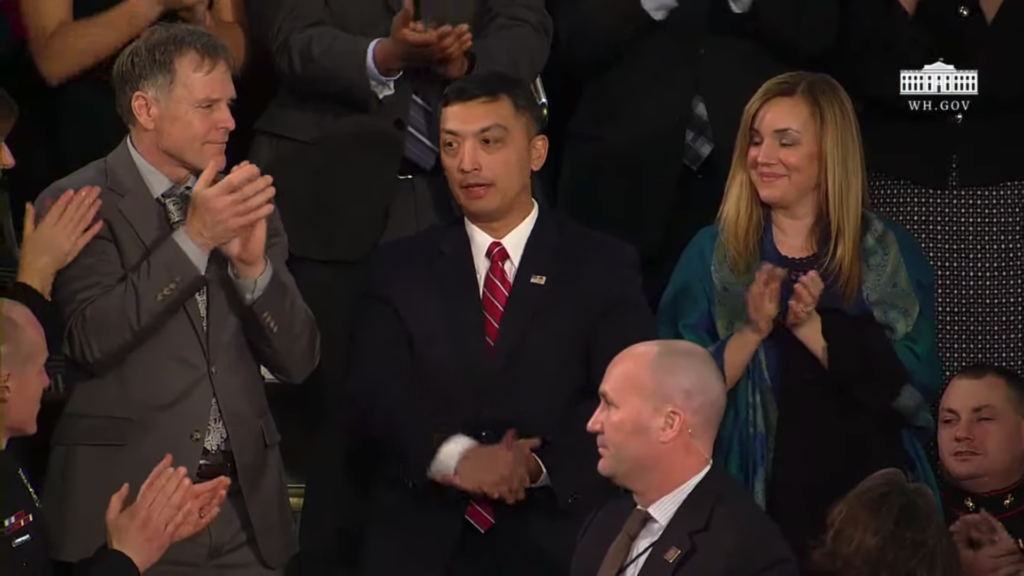 “Their two teenage daughters, Kayla Cuevas and Nisa Mickens, were close friends on Long Island. But in September 2016, on the eve of Nisa’s 16th birthday, such a happy time it should have been, neither of them came home. These two precious girls were brutally murdered while walking together in their hometown. Six members of the savage MS-13 gang have been charged with Kayla and Nisa’s murders. Many of these gang members took advantage of glaring loopholes in our laws to enter the country as illegal, unaccompanied, alien minors.” 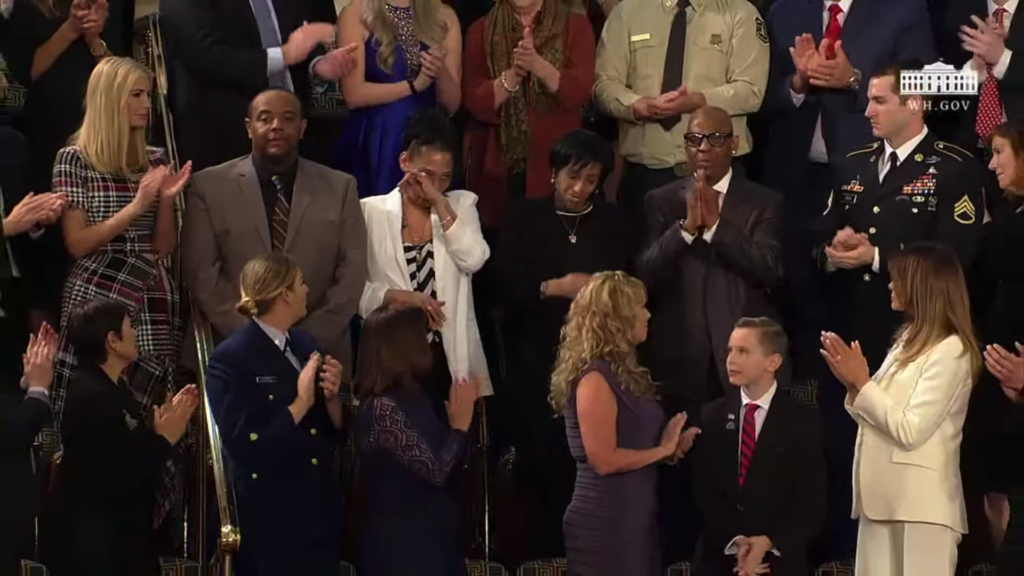 One could not help but tear up as you saw the faces of these family members still grieving the loss of their daughters.

On North Korea, he again moved us with compassion for the parents of Otto Warmbier, the American student who died after being tortured by the North Korea regime. 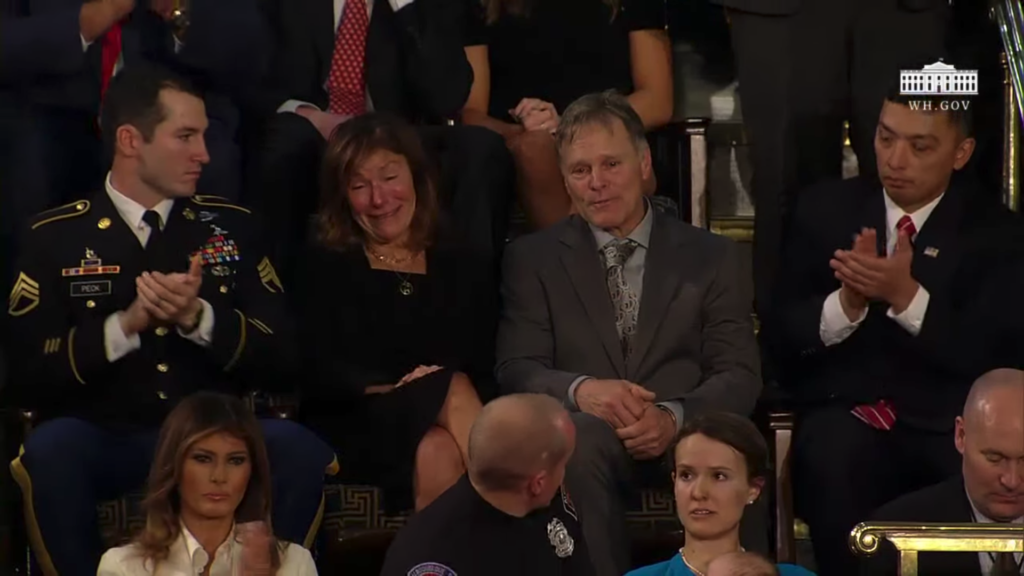 And he shocked the audience with the story of Ji Seong Ho.

In 1966, Seong Ho was a starving boy in North Korea. One day he tried to steal coal to barter for a few scraps of food. In the process, he passed out on the train tracks, exhausted from hunger.

“He woke up as a train ran over his limbs. He then endured multiple amputations without anything to dull the pain or the hurt. His brother and sister gave what little food they had to help him recover and ate dirt, themselves, permanently stunting their own growth.

“Later he was tortured by North Korean authorities after returning from a brief visit to China. His tormentors wanted to know if he’d met any Christians. He had, and he resolved after that to be free. Seong Ho traveled thousands of miles on crutches all across China and southeast Asia to freedom. Most of his family followed. His father was caught trying to escape and was tortured to death. Today, he lives in Seoul, where he rescues other defectors. Today he has a new leg, but Seong Ho, I understand you still keep those old crutches as a reminder of how far you have come. Your great sacrifice is an inspiration to us all.” 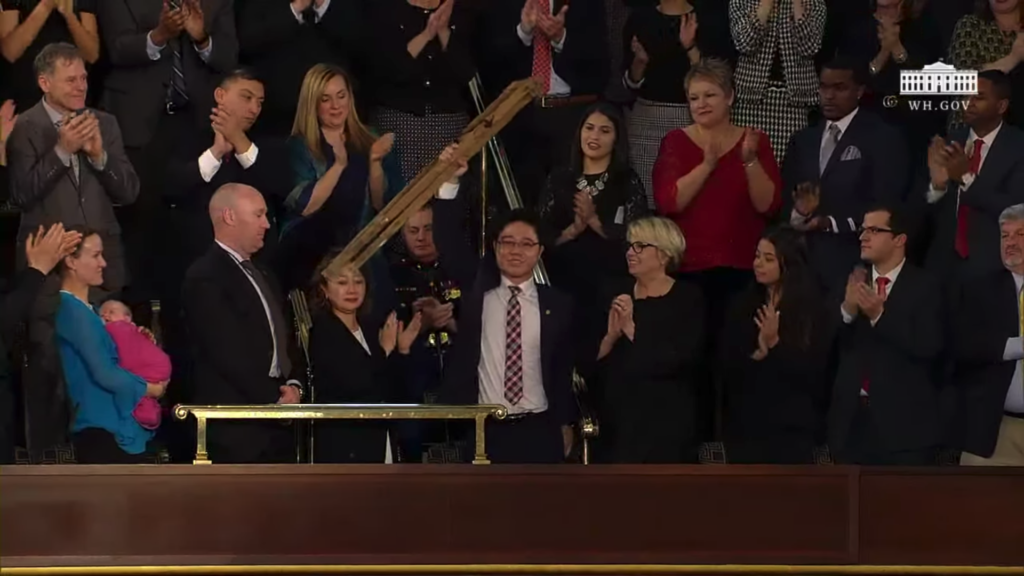 The stories were overwhelming.

There was Ryan and Rebecca Holets.

“Last year, Ryan was on duty when he saw a pregnant, homeless woman preparing to inject heroin. When Ryan told her, she was going to harm her unborn child, she began to weep. She told him she didn’t know where to turn, but badly wanted a safe home for her baby.

“In that moment, Ryan said he felt God speak to him. You will do it, because you can. He heard those words. He took out a picture of his wife and their four kids. Then he went home to tell his wife Rebecca. In an instant, she agreed to adopt. The Holets named their new daughter Hope. Ryan and Rebecca, you embody the goodness of our nation.” 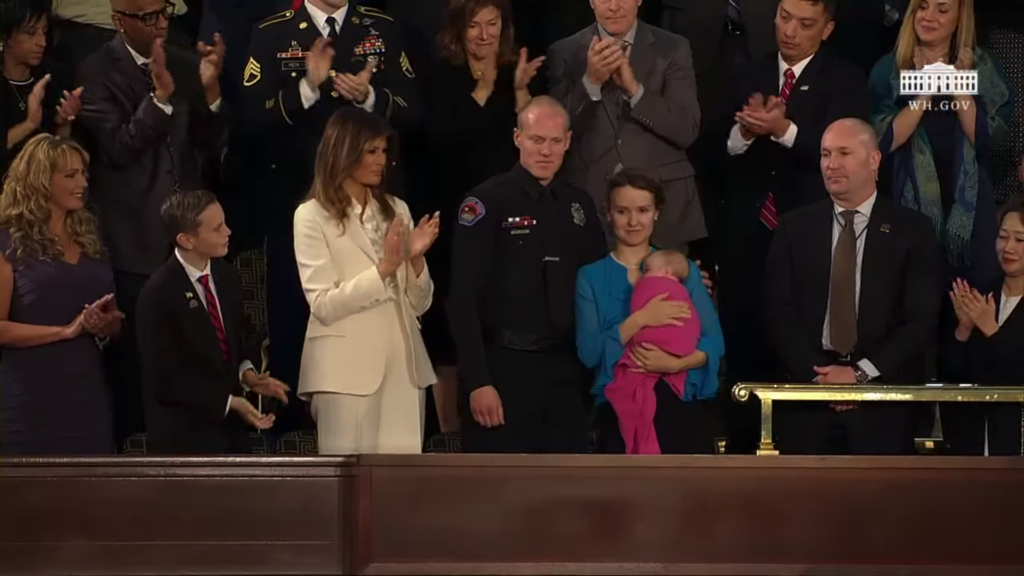 Can there be a more powerful pro-life statement than that?

There was more, but you get the picture. The president sounded sincere, poised and thoughtful on his every policy position. It was impressive.

The depressing note of the night was the Democrat’s inability to overcome their partisanship for the simplest of statements. They sat stiff, so unwilling to acknowledge anything the president said positively it was almost like a child’s tantrum.

President Trump: “Tonight, I call upon on all of us to set aside our differences, to seek out common ground, and to summon the unity we need to deliver for the people.” 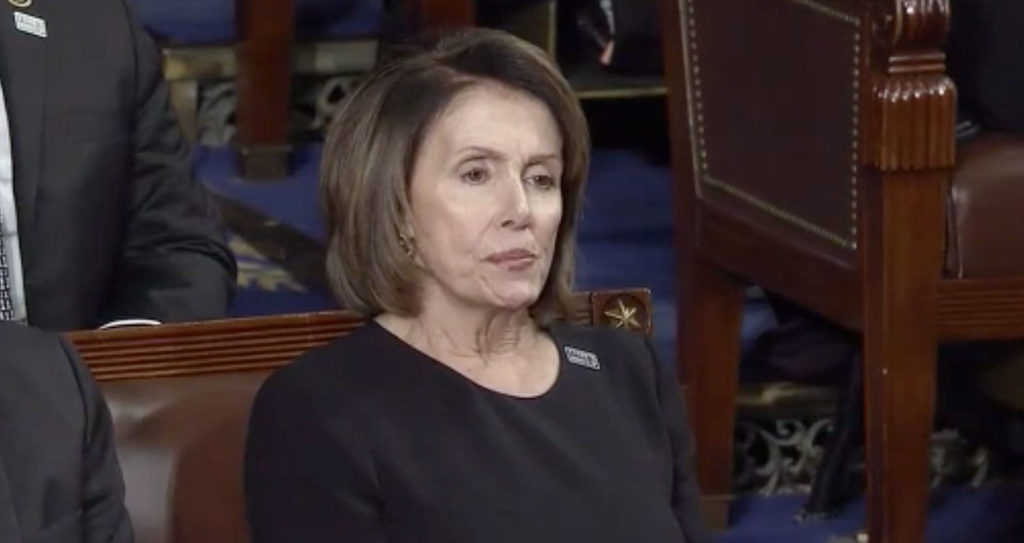 She is representative of the vast majority of Democrats. Why? Why can’t they stand and clap with everyone else on such a simple statement? 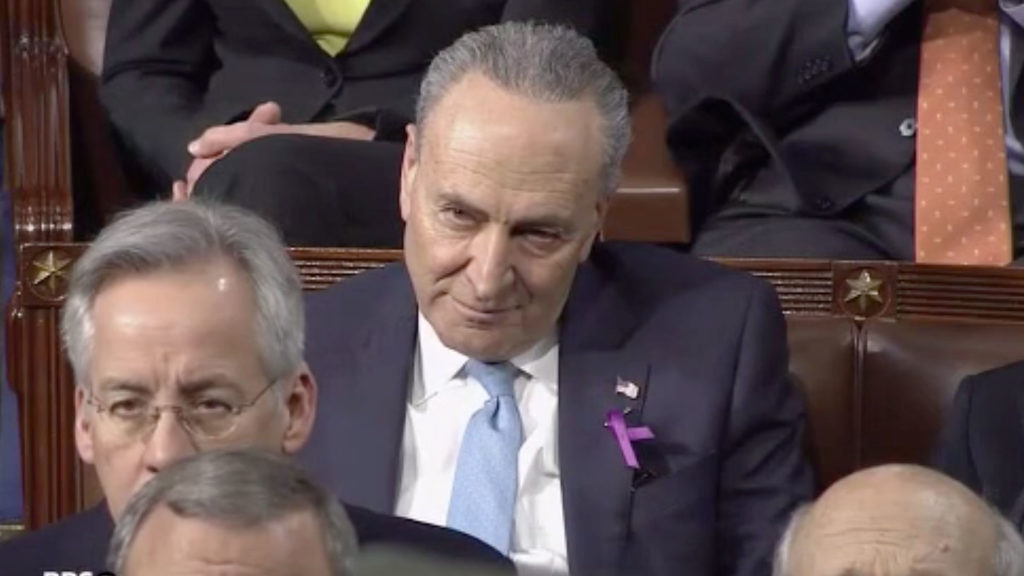 That’s good news coming from anybody, except President Trump apparently, according to Dems. 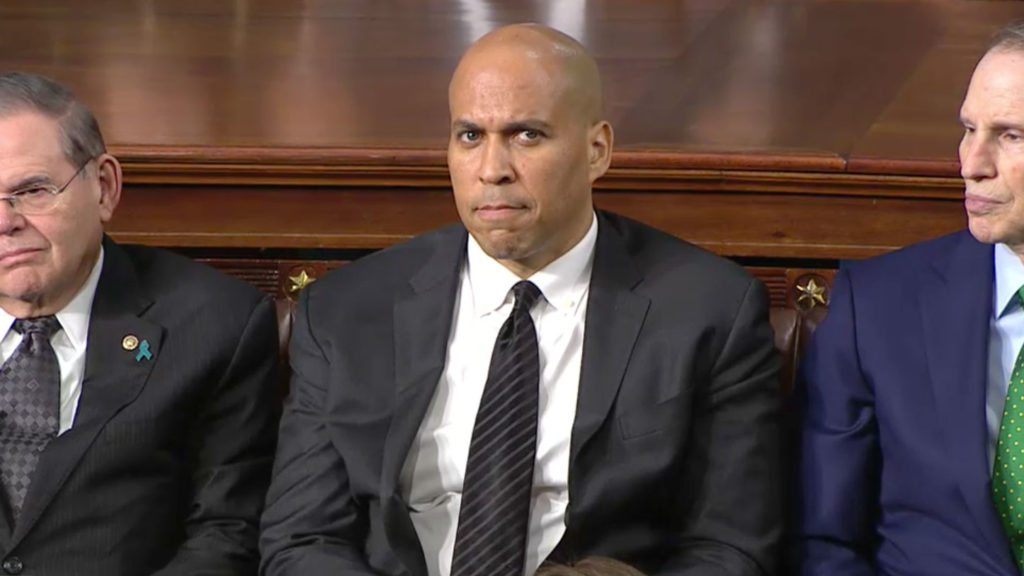 I understand they don’t like President Trump.  I understand not clapping for the tax cuts, for example, since they were so adamantly against it. Or when he talked about repealing the Obamacare mandate. Ok, you don’t have to clap there.

But for, “In America, we know that faith and family, not government and bureaucracy, are the center of American life.”? You can’t clap for that?  By the way, President Trump followed that one with, “The motto is in God we trust.”

It is refreshing to hear a President proudly remind us of who we are as a people.

On that note, the president again, highlighted it with the story of a young patriot named Preston.

“[A] 12-year-old boy from Redding, California, [Preston] noticed veterans’ graves were not marked with flags on Veterans Day. He decided all by himself to change that and started a movement that has now placed 40,000 flags at the graves of our great heroes …

“Preston’s reverence for those who have served our nation reminds us of why we salute our flag, why we put our hands on our hearts for the pledge of allegiance and why we proudly stand for the national anthem.” 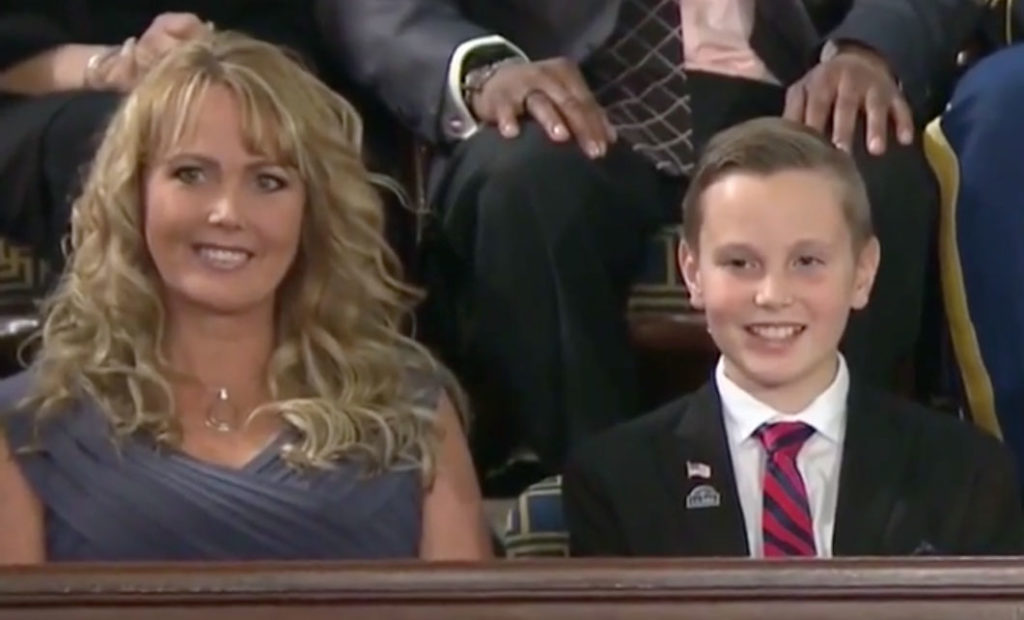 President Trump said, “All Americans deserve accountability and respect.” He spoke about prison reform: “[T]his year we will embark on reforming our prisons, to help former inmates who have served their time get a second chance at life.”  That is all good, why not applaud what is good?

The President said, “I want our youth to grow up to achieve great things. I want our poor to have their chance to rise. So tonight, I am extending an open hand to work with members of both parties, Democrats and Republicans, to protect our citizens of every background, color, religion and creed.” What is wrong with that?

Nothing. But it doesn’t fit the narrative.  What a shame.