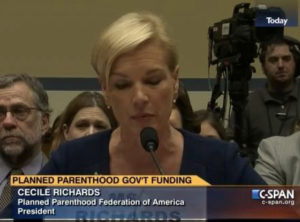 Planned Parenthood’s annual budget is a massive $1.5 billion. You provide, through your tax dollars, 41% of that.  Is this necessary? The numbers are clear, and the answer is a resounding, “No.”

To understand the financial situation of Planned Parenthood, it is helpful to examine its past two annual reports. These reports offer insight on why the federal government should shift funding away from Planned Parenthood without fear of depriving women of health care.

The two most popular and frequent arguments against shifting funding away from Planned Parenthood revolve around two specific services that Planned Parenthood provides for women: birth control and health examinations. Indeed, Planned Parenthood prides itself on promoting and supporting all aspects of women’s health. However, from 2014-2015 to 2015-2016, the numbers of services in this capacity went down significantly.

While the 2014-2015 report does not include the numbers for well-woman exams, the numbers of this service only account for 2% of all services provided by Planned Parenthood in 2015-2016. Additionally, the amount of birth control distributed through their centers went down by 140,000 from 2014-2015.

The services which liberals offer as evidence of the necessity of Planned Parenthood for women’s health care are decreasing every year, yet the numbers of abortions are growing. In the past year, the number of abortions increased by 5,000. This simple fact, found through a quick overview of Planned Parenthood’s annual report, proves the foundation for the true mission of the largest abortion provider in the nation.

How is this possible when Planned Parenthood’s services for women are decreasing steadily? The sad but simple answer is “abortion.” Planned Parenthood conducted 328,348 abortions in 2015-2016, and the profit from those abortions ranges anywhere from $136 million to $364 million.

Why are we funding this organization with our tax dollars?  Add to this the fact that Planned Parenthood is currently under investigation for selling aborted baby parts, and the fact is there is no reason we should be funding them.

It’s time for Congress to reevaluate federal funding for abortion. Planned Parenthood doesn’t need taxpayers’ dollars.  Abortion is not health care, but it is a lucrative business, as we have seen. It is why their services for women are slowly being overwhelmed by STD testing and abortions. Planned Parenthood’s ever-growing wealth indicates that it is more than able to raise a profit on its own.