Repealing ObamaCare and the Future of Women’s Health Care 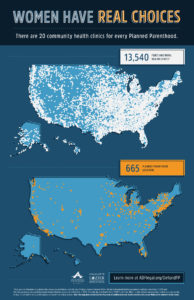 A repeal of ObamaCare and the subsequent defunding of Planned Parenthood does not mean the end of easy access to women’s health centers. However, the media is still trying to villainize the Republicans’ attempt to fix the collapsing ObamaCare experiment.

The most recent effort was a CNN article discussing the story of a woman, Ariana Gonzalez, who lives in the Imperial Valley of California. Due to long wait periods at her local doctor’s office and complications following the birth of her youngest child, Gonzalez began to frequent a local Planned Parenthood where she received the needed care as well as birth control.

Before the Planned Parenthood opened in her town, however, Gonzalez often crossed the border into Mexico to receive affordable treatment. She fears that, if the current Senate health care bill becomes law, she will once again have to return to Mexico for affordable medical treatment and birth control because her Planned Parenthood will shut down due to lack of funding.

She criticizes the GOP, most of whom are men, for deciding what is best for women. However, this single quote in the article reveals the true intent behind Gonzalez’ story. While she may indeed struggle to find care, this criticism is a talking point straight from Planned Parenthood’s playbook.

While the media continually promotes the falsehood that conservatives do not care about women, a quick examination of the facts reveals the very opposite. Data from the Charlotte Lozier Institute reveals that there are currently twenty-three federally qualified health centers (FQHCs) for every Planned Parenthood.

FQHCs are facilities that “are required to provide comprehensive services to an underserved area or population, offer a sliding fee scale, have an ongoing quality assurance program, and have a governing board of directors, the majority of whom are patients of the health center.” These FQHCs are alternatives to Planned Parenthoods, and the new Republican health care plan will redirect funding to FQHCS. The funding is meant to improve the quality and expand the service at these centers.

Gonzalez herself has an FQHC in her town, which could provide her with the care that she requires. Yet, in response to this option, she recounts the long wait time when she went to the clinic to receive care for her son.

Wait time is a normal aspect of any doctor’s office, yet returning to Mexico for treatment is not the answer. While Gonzalez waited for four hours to see a doctor in her town, she had to go to Mexico and back, and then, according to her own account, waited three hours to get back to the United States after receiving care across the border. Her assessment is an attempt to help Planned Parenthood, but in reality, the facts don’t support it. Also, with more funding for FQHCs, each clinic will be better equipped to help their patients.

Additionally, since Planned Parenthood does not offer pediatric care, Gonzalez must find care for her family elsewhere. Remember also that Gonzalez’ Planned Parenthood will not necessarily close, even if it ceases to receive federal funding.

Like many women, Gonzalez uses Planned Parenthood as a place to quickly and easily acquire her regular birth control. Even with a new health care plan, the HHS birth control mandate will still be in place. In Gonzalez’ town of El Centro, her local health center would be able to fulfill her need for birth control.

Every cent that is spent helping Planned Parenthood concentrate on abortion today will still go towards women’s health. These clinics provide care for a much larger range of people and the whole woman, while Planned Parenthood’s main focus, as we have seen time and again, is abortion.

It’s time to redirect federal funding in a way that benefits the most people. As a result, women like Ariana Gonzalez will receive better care and will not have to help Planned Parenthood continue its abortion promotion, just to get birth control.