The Face of the Abortion Industry 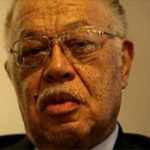 Dark, morbid, gruesome, unloving and evil are some of the words that come to mind when I think of the abortion industry. Add to that delusional and creepy. Kermit Gosnell, who was protected for years by an abortion lobby that refuses any and all attempts to regulate their dreadful industry, recently granted a jailhouse interview to Phelim McAleer and Ann McElhinney, the producers of an upcoming documentary on his life. Most of you remember Gosnell was the abortionist convicted on multiple counts of first-degree murder after he was exposed for murdering babies after botched abortions and putting numerous women at risk, resulting in the death of at least one of them. He is the face of abortion. And abortion is horrendous. So it should be no surprise that in the interview his true colors came out. Although the footage of the interview is not available at the moment, MCAleer told Life News:

I have been a journalist for over 25 years covering the troubles in Northern Ireland, and Ann and I have done a number of interviews in prisons in Ireland and Eastern Europe. We have worked undercover exposing baby-selling in Vietnam and Indonesia, but I can honestly say that this interview was one of the creepiest interviews we have ever conducted.

He added that Gosnell “showed no remorse [and] believes he is a martyr.” Gosnell was so creepy that he apparently was “completely inappropriate with Ann [McElhinney],” McAleer said to Life News “touching her and singing love songs.” McElhinney confirmed the regrettable episode as she was interviewed by Danna Loesch of TheBlaze about her experience, saying “He [Gosnell] touched my leg. He was physically inappropriate — sat far, far too close in my personal space. Extremely disturbing.” She concluded, “I haven’t met anyone who chilled my blood to that extent ever before. This man has no sense of guilt.” Which surely explains why he excelled at his “profession.” And why he rightfully sits in jail today. — Read more posts like this on the Legal Blurb Blog on CWA’s Legal Studies Page. Follow Mario on Twitter @legalblurbblog