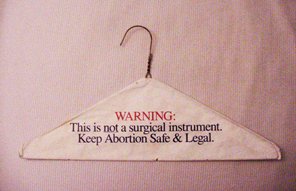 One of the most often repeated talking points of the pro-choice left, and even your average apolitical American, is that abortion must be legal because, if illegal, women will need abortion so badly they will resort to clothes hangers to self-induce abortion.

This argument is fundamentally flawed and makes a good deal of unfounded assumptions.

ASSUMPTION: If abortion were illegal, then abortion would not be available at good clinics, and women would do them at home.

REALITY: Abortion clinics have always and will always exist as an option for women who want them.  When abortion was illegal in the late 50s, a Planned Parenthood representative explained that only 8% of illegal abortions were done at home, and a full 90% were done by medically trained physicians.   When abortion became legal, their practices continued as is with less threat from the law but no alteration in procedure.

ASSUMPTION: If abortion were illegal, this would not act as an effective deterrent to getting an abortion.  Women — maybe just as many women — would still be getting abortions, even if they had to do them themselves.

REALITY:  When abortions are illegal, fewer women desire and obtain them.  The law does serve as a natural deterrent on human behavior.  This is illustrated by the example of Poland, where the total number of legal abortions was over 130,000 for several years under communism — and paid for (when in the first trimester) by the state.  This number greatly reduced in 1990 to under 60,000 and then down to less than 300 a year by 1998, most of which were only for “difficult” cases (rape, incest, mother’s life, mother’s health, and fetal impairment).

REALITY: Women experience serious health complications and can die from abortion.  This includes 427 women that we know of who have died from legal abortion, but that is a far underreported number (one year, the whole U.S. abortion death total was reported as 21, but later 12 additional deaths which had not been reported were uncovered — but those 12 were shockingly in just Chicago alone.)  Women also face increased risks of cancer, suicide, depression, and substance abuse because of abortion.  Butchers like Kermit Gosnell in Pennsylvania and others like him reveal the decrepit conditions in today’s abortion clinics.  Pro-choicers claim “Safe, Legal, and Rare” (a mantra that is evolving to “Safe, Legal, and Accessible”) but turn a blind eye to such cases and oppose further regulations on today’s abortion clinics.

ASSUMPTION: Abortion should be legal or illegal based on its effect on women — not based on whether abortion itself is objectionable.

REALITY:  Those who make an argument for clothes-hanger abortions hesitate to outwardly proclaim that abortion itself if good, but merely insist that abortion is necessary to protect women’s health.  Were this to be examined more closely, these activists would have to decide whether abortion itself can be justified, which it is not because it is never safe for the unborn child that is ruthlessly destroyed.  Abortions always result in deaths of children and risks to the mother — no matter how clean or unclean, legal or illegal.

ASSUMPTION: Women need abortion.  As a recent pro-choice chant put it: “Without this right we can’t be free, abortion without apology.”

REALITY: If abortion is so desperately needed that a woman would resort to any method of obtaining it, even a dangerous method like a clothes hanger — then it is not a choice and not a right — it’s a necessity like food or water.  This disempowering idea that abortion is NEEDED at all costs (the cost of women’s health, the cost of unborn life, etc.) is an anti-woman belief that does nothing to help women or give them real choices.  In reality, women have 13,000 local Federally Qualified Health Centers, in addition to thousands of local health centers, private practices, and pregnancy centers that can help them when they are in need.

ASSUMPTION: When abortion was illegal, thousands of women died from illegal abortions.

REALITY: Bernard Nathanson was once a cofounder of the pro-choice organization NARAL, but later regretted his involvement in the legalization and proliferation of abortion in America.  He admitted that all the figures about five or 10 thousand women dying from illegal abortions per year were made up statistics fabricated to support his talking point that abortion needed to be legalized in order to be made safer.

Chaney Mullins serves as Special Projects Writer for Concerned Women for America. She wishes to express her appreciation for the excellent book, “ProLife Answers to ProChoice Arguments,” by Randy Alcorn, which served as a source for much of this article; she wholeheartedly recommends the resource for all pondering abortion questions.