By CWALAC StaffNovember 24, 2015Blog, News and Events, Sanctity of Life

Planned Parenthood supporters insist taxpayers should continue to fund Planned Parenthood because “women will have nowhere to go.”  This is simply not true.  For example, many political pundits and Hollywood elites speaking up for Planned Parenthood love to ask, “Where will women go to get a mammogram?”  The answer seems to be, ironically, wherever they currently get it, because Planned Parenthood does not provide them; they only do referrals for them.

The president of Planned Parenthood, Cecile Richards, has confirmed that they, in fact, do not provide mammograms: “We do not have mammogram machines at our health centers.”

Then supporters raise questions about breast exams, but these can be performed by any primary care doctor, gynecologist, nurse practitioner, or physician’s assistant, not just at Planned Parenthood.  This is no argument for the taxpayer funding of the number one abortion provider in the country.

And the list of goes on.  See this chart by Democrats for Life: 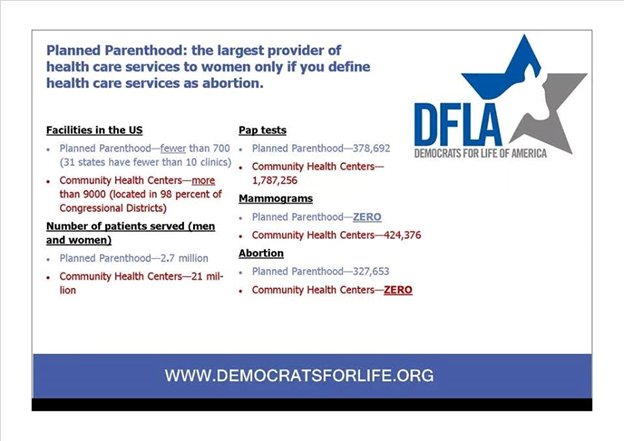 Another indication that Planned Parenthood’s focus is on abortion and not women’s health is their very narrow emphasis on “reproductive issues.”  Woman’s health care is much broader than “reproductive issues.”  Alzheimer’s, respiratory illness, diabetes, kidney disease, and heart disease are all major threats to woman’s health that Planned Parenthood does nothing about.  Heart disease is considered the number one killer of women.

Besides all that, the simple fact is that there are many alternatives to Planned Parenthood.

It is important to note that not all of Planned Parenthood’s patients are in financial need, because this is all they like to tout in the media; many of their patients can obtain care in private clinics outside of Planned Parenthood, of course. Those who are in financial need could go anywhere that takes Medicaid, including community health centers and rural health clinics.  States often have health supplement plans available as well, using state funds (a state version of Medicaid) which help poor women.

CWA is proud to be a sponsor of the GetYourCare.org effort to educate women on the many alternatives they have to Planned Parenthood.  The website is dedicated to helping women find qualified federal health centers and rural health centers (more information on the qualifications and distinctions here), meaning those which are federally funded and which, thus, accept Medicaid.  The map is interactive, so you can type in a zip code and pull up the centers in that area (there are thousands of clinics).  Soon, the map will include hospitals and urgent care centers, because they also provide women’s health care.

In another important graphic tool below, the Alliance Defending Freedom and the Charlotte Lozier Institute highlight that the ratio of comprehensive care clinics to Planned Parenthoods is 20 to 1. 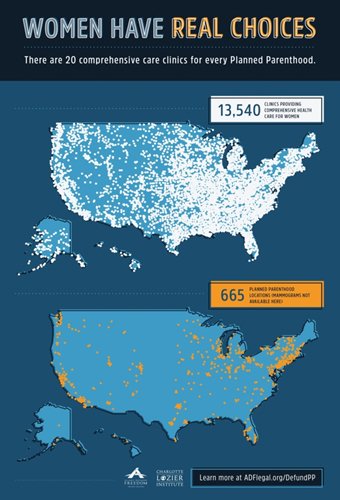