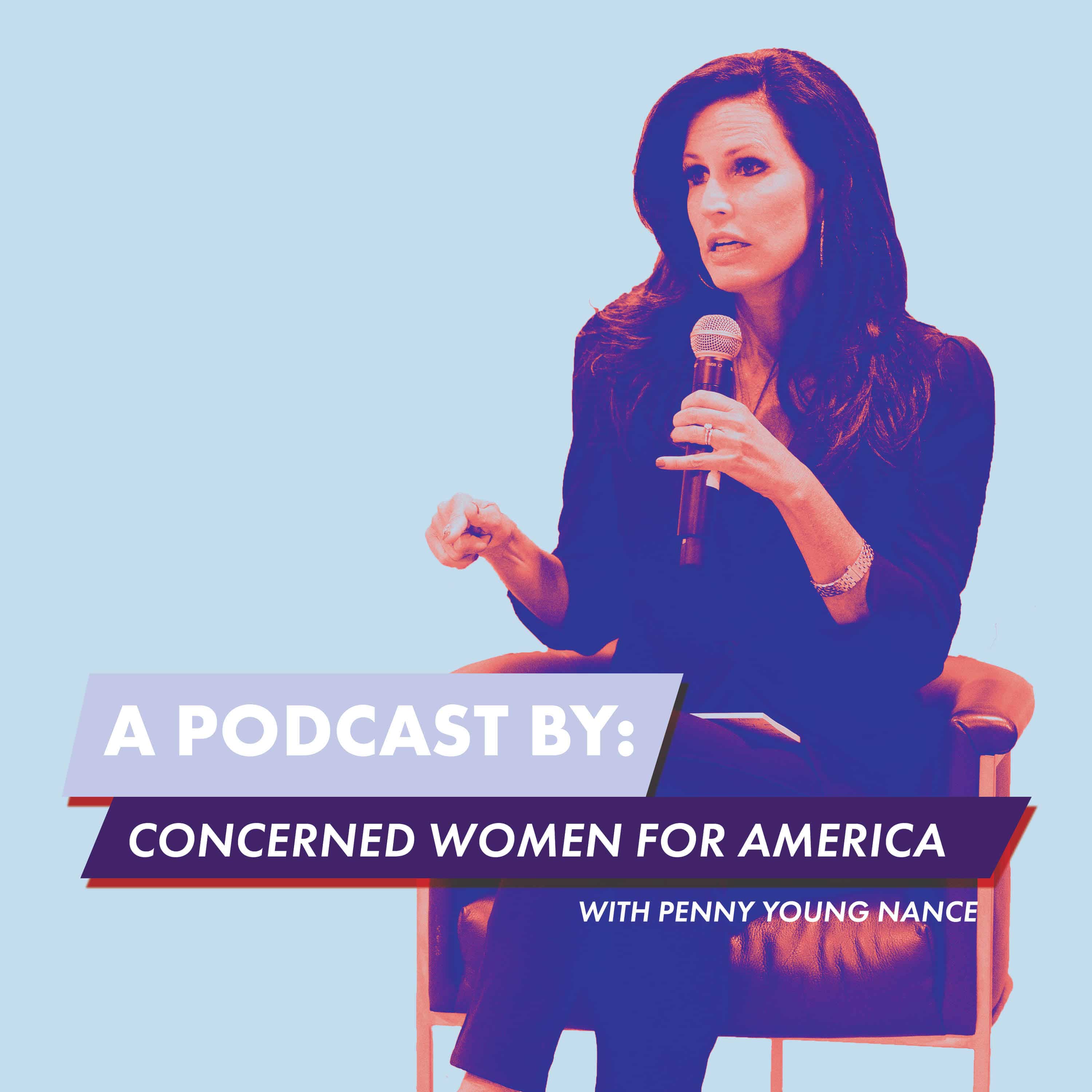 In late May, the nation went from Coronavirus lock-down to racial unrest in a matter of moments. After George Floyd’s tragic death by a white policeman, we watched in horror as day after day peaceful protests turned to violent riots and looting. CWA’s CEO and President Penny Nance speaks to Kay Cole James, the President of Heritage Foundation and an African American woman leader in government, academia and the conservative movement on the senseless killing of George Floyd.

Listen as she delivers a message of healing and hope that is centered in Christ.

Listen to the Podcast with Kay Coles James Here (Episode 25):

Use Your Voice – Episode 12, Abortion and Eugenics

By CWFA Staff | Blog, Planned Parenthood, Sanctity of Life, Use Your Voice | No Comments

In this episode, Mario Diaz, Esq., Concerned Women for America’s (CWA) General Counsel, discusses a recent Supreme Court decision where Justice Clarence Thomas exposes the clear connection between abortion and eugenics. He said, “Abortion is an act rife with the potential for eugenic manipulation.”

The case is Box v. Planned Parenthood of Indiana and Kentucky, and you won’t want to miss our discussion of its potential impact and what it means for the protection of the unborn.

Use Your Voice – Episode 11, Transgenders and Sports

By CWFA Staff | News and Events, Use Your Voice | No Comments

In this episode, Doreen Denny, Concerned Women for America’s Senior Director of Government Relations talks with Beth Stelzer, the founder of Save Women’s Sports. Beth is a powerlifter and she shares with us her unique personal story about transgender athlete participation in her sport.  Through Save Women’s Sports, Beth is helping to preserve biology-based eligibility standards for participation in female sports.

More: USA Powerlifting Doubles Down on its Transgender Policy

By CWFA Staff | Use Your Voice | No Comments

In this episode, Doreen Denny, Concerned Women for America’s (CWA) Senior Director of Government Relations discusses H.R. 962, the “Born-Alive Abortion Survivors Protection Act,” which would shield a newborn who survives an attempted abortion from being denied the care the baby needs. Doctors would be required to provide the same medical care to a newborn survivor of abortion that would be offered to any other baby at the same gestational age.

Use Your Voice – Episode 9, The Heartbeat of Humanity

By CWFA Staff | Use Your Voice | No Comments

In this episode, CEO & President of Concerned Women for America Penny Nance looks back at her CPAC 2019 experience, where she was joined by Congresswoman Cathy McMorris Rodgers and Dr. Ben Carson, in a moving panel that left a mark on this year’s amazing festivities, to discuss the dignity of every human life.

Use Your Voice – Episode 8, Exposing the Darkness of “Big Abortion”

By CWFA Staff | Planned Parenthood, Sanctity of Life, Use Your Voice | No Comments

Listen to the amazing story of how one young man took on the abortion industry, exposing their greed and callous regard for human life on video. David Daleiden, the founder of The Center for Medical Progress (CMP), exposed Planned Parenthood benefitting from the sale of aborted baby body parts, including hearts, brains, and lungs. Planned Parenthood said at the time that the videos were “heavily edited.” But a recent court ruling vindicated David and CMP’s work, ruling the videos were authentic and not deceptively edited as the lower district court had insinuated.

[AUDIO] Use Your Voice – Episode 7, Year of the Woman

The first podcast of 2019 might be our favorite so far! Penny Nance sits down with Senator Cindy Hyde-Smith (R-Mississippi) in her office on Capitol Hill. They discuss Sen. Hyde-Smith’s story, what it’s like to be a conservative female leader in Congress, and advice to young girls thinking about running for office.

Penny Nance is joined by CWA’s Senior Director of Government Relations, Doreen Denny to take stock of the life issue in the upcoming 116th Congress. Just over a month past the election, there are so many things to address but this episode focuses on what the election results mean for the pro-life movement – opportunities to hold the line on the issue, hurdles to overcome, and what CWA has done and is doing to ensure these innocent lives inside the womb are being fought for!

[AUDIO] Use Your Voice – Episode 5, Adoption – A Celebration of Life

By CWALAC Staff | Uncategorized, Use Your Voice | No Comments

Did you know that in Virginia alone, there are about 5000 children in the foster care system and about 1000 children who are available for adoption AT THIS MOMENT. And that is just one state.

DJ Jordan joins Penny Nance to celebrate November as National Adoption Awareness Month. After a career in journalism, DJ spent almost a decade on Capitol Hill including as a spokesperson for Rep. Aderholt (R-Alabama) and as Communications Director for Sen. Lankford (R-Oklahoma). At this time, DJ is running for the state legislature in Virginia and he joined Use Your Voice this month to share his family’s heart for adoption and the story of their daughter, Tori.

This month’s episode is our favorite to date. Adoption is a beautiful expression of the heart of God and DJ’s incredible personal insight is worth hearing.

[AUDIO] Use Your Voice – Episode 4, Why Women Support Kavanaugh

Why do women support Kavanaugh? Listen as Penny Nance takes you inside the Women for Kavanaugh – I Stand With Brett Rally organized by CWA on the day of the hearing with Dr. Christine Blasey Ford.

[AUDIO] Use Your Voice – Episode 3, Women for Kavanaugh

Join CWA in Judge Brett Kavanaugh’s confirmation hearing as we go behind the scenes. You’ll hear some of Judge Kavanaugh’s statements as well as protests from inside the hearing room. Penny teases out the credentials and character of SCOTUS nominee, Judge Brett Kavanaugh and Use Your Voice takes you on the road with the Women for Kavanaugh Bus Tour! Annabelle Rutledge, CWA Communications Coordinator interviews CWA State Director of Florida, Terri Johannessen and YWA President at Florida State, Julie Griner.

In this episode, Penny is joined by CWA’s Vice President of International Affairs, Dr. Shea Garrison, to discuss global religious liberty. The first week of June, then newly appointed Secretary of State Mike Pompeo declared international religious freedom a “universal human right.” He followed up on that by hosting the State Department’s first-ever Ministerial for Advancing Religious Freedom. CWA was invited to hold a side event which Shea spearheaded in conjunction with The Heritage Foundation, “How to Protect International Religious Freedom form the Politicization of Human Rights.”

Penny has the pleasure of interviewing her longtime friend, Pam Pryor. Pam Pryor is the Senior Advisor, Under Secretary for Civilian Security, Democracy, and Human Rights, U.S. Department of State. Pam has so much insight to share about global religious liberty from the perspective of someone from the State Department.

Penny also discusses the discrimination some faith-based foster and adoption agencies are experiencing and what the Aderholt Amendment is doing to ensure these agencies are allowed to continue operating and serving America’s children.

The first installment of our new podcast, Use Your Voice, aired on Monday, June 9, 2018. We discussed with Concerned Women for America’s General Counsel Mario Diaz, Esq., the upcoming battle over the replacement of Justice Anthony Kennedy at the U.S. Supreme Court.  And we went to Iowa where Janae Stracke, CWA’s Field Director, is already mobilizing our members in support of Sen. Chuck Grassley (R-Iowa) who leads the Senate Judiciary Committee.

For more information on this topic, visit WomenforKavanaugh.com.