In a “per curiam” opinion, meaning a decision authored by the entire Court, instead of a single justice, the United States Supreme Court granted a stay of the Occupational Safety and Health Administration (OSHA) vaccine mandate for employers with 100 or more workers. The rule, therefore, will not go into effect until the case goes through the entire appellate process.

But the Court’s division can be further assessed by the fact that the three more liberal justices—Justices Stephen Breyer, Sonia Sotomayor, and Elena Kagan— dissented from the opinion, and Justices Clarence Thomas and Samuel Alito joined a very strong concurring opinion by Justice Neil Gorsuch.

The Court’s sensible approach to the issue simply noted that OSHA’s “emergency standard,” which it used here and which circumvents the usual public notice and comment accountability processes, should be used with precision and caution. Instead, the Court notes that the OSHA rule which applies to 84 million workers “requires workers receive a COVID-19 vaccine, and it pre-empts contrary state laws,” works as “a blunt instrument.” It found the exemptions presented (for employees who work outside 100 percent of the time or who work exclusively outdoors, for example) were “largely illusory.” The rule “draws no distinctions based on industry or risk of exposure to COVID-19.”

The Court found those objecting to the rule were “likely to succeed on the merits of their claim that [OSHA] lack[s] authority to impose the mandate.”

In doing so, the Supreme Court returns power to the states and the people, where it belongs, because the vaccine mandate goes way beyond establishing a simple workplace standard, as the agency is charged to enact, and into establishing nationwide public health policy. Remember, OSHA has never in its history done anything like this.

And here is where Justice Gorsuch’s concurrence is extremely helpful because it acknowledges what most Americans understand. This administrative mandate is trying to accomplish what President Joe Biden could not get done through the people’s representatives. He is trying to enact something Congress up until now has rejected.

If the people want a vaccine mandate, they could easily demand it from Congress. The reality is most people do not. In fact, the President’s approval numbers have been steadily declining. The latest numbers show him at an all-time low of 33 percent.  Fifty-five percent disapprove of his handling of the pandemic.

That is why President Biden had to work through OSHA to establish this national vaccine mandate. He lacks the necessary support to do it otherwise.

The central question we face today is: Who decides? No one doubts that the COVID–19 pandemic has posed challenges for every American. Or that our state, local, and national governments all have roles to play in combating the disease. The only question is whether an administrative agency in Washington, one charged with overseeing workplace safety, may mandate the vaccination or regular testing of 84 million people. Or whether, as 27 States before us submit, that work belongs to state and local governments across the country and the people’s elected representatives in Congress.

That power belongs to the people, said the Supreme Court today—to those most immediately accountable to them. The concurrence noticed that “a majority of the Senate even voted to disapprove OSHA’s regulation.” Therefore, it seemed reasonable to conclude “the agency pursued its regulatory initiative only as a legislative ‘work-around.’”

With this decision, the Court re-affirms what it has said in the past, that major questions of doctrine with broad effects on the public are left to the people’s elected representatives, and that they must make it very clear when they are giving such broad power to an agency. The concurrence said this rule, known as the “major questions doctrine”:

[E]nsures that the national government’s power to make the laws that govern us remains where Article I of the Constitution says it belongs—with the people’s elected representatives. If administrative agencies seek to regulate the daily lives and liberties of millions of Americans, the doctrine says, they must at least be able to trace that power to a clear grant of authority from Congress.

And even then, the concurrence suspects that such an intrusive mandate brought through the backdoor of an administrative agency might run afoul of the “nondelegation doctrine,” which “ensures democratic accountability by preventing Congress from intentionally delegating its legislative powers to unelected officials.”

On the one hand, OSHA claims the power to issue a nationwide mandate on a major question but cannot trace its authority to do so to any clear congressional mandate. On the other hand, if the statutory subsection the agency cites really did endow OSHA with the power it asserts, that law would likely constitute an unconstitutional delegation of legislative authority.

Whatever your view of the COVID vaccine in general, it should be encouraging to all to see the Court protecting the Constitutional structures that guard our liberties in this way. As Justice Gorsuch put it, “The question before us is not how to respond to the pandemic, but who holds the power to do so.”

The rule will be halted for now, but the case will continue. As we await further proceedings let us pray for a wiser, more honest, and unifying approach to fighting the pandemic going forward.

Perhaps at the top of our list for accomplishments this year is the confirmation of Justice Neil Gorsuch to the United States Supreme Court.  God was so gracious to us!

You have to remember that before the election, when the unexpected death of Justice Antonin Scalia was announced, Hillary Clinton was, without a doubt, going to be President.  And the Court was going to be lost to the liberal side for a generation.

But God had other plans.  And when President Trump won, everything changed.  He nominated an exceptional candidate in Neil Gorsuch, and Concerned Women for America all over the country pour out their heart and soul in getting him confirmed.

Help CWA stand strong on the front lines. Your year-end gift will help us defend critical issues like the sanctity of life and religious freedom. Visit www.CapitolHillBrief.org and give your year-end gift today. If you’d like to hear these commentaries on the radio, find me on your local radio station. 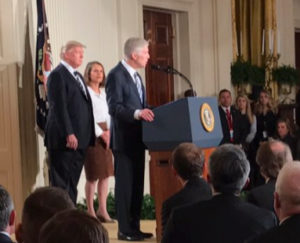 Reading through President Donald Trump’s Supreme Court Nominee Judge Neil Gorsuch’s decisions is a pleasure for those of us who love the Constitution and the rule of law.  Here is a good example.

Before the Supreme Court ever heard the Hobby Lobby case, Judge Gorsuch took a stab at it in his time at the U.S. Court of Appeals for the Tenth Circuit.

If you remember, after ramming through the Affordable Care Act (ACA), aka Obamacare, with not a single Republican vote in support, using every dirty, political trick in the book (and even inventing new ones), the Obama Administration insisted in unnecessarily forcing Christian businesses to violate their conscience and pay for contraceptives and abortifacients, even if to do so would be against their deeply held religious beliefs.

The Green family of Hobby Lobby and many other Christian businesses objected to this violation of their religious freedom and sued under the Religious Freedom Restoration act (RFRA).

In the case of a constitutionalist, like Judge Gorsuch, the case was a simple one.  And it was most certainly not about their personal religious views or policy preferences.  Here is how he put it, concurring in judgment in favor of the Greens.

In many ways this case is the tale of two statutes. The ACA compels the Greens to act. RFRA says they need not. We are asked to decide which legislative direction controls. The tie-breaker is found not in our own opinions about good policy but in the laws Congress enacted. Congress structured RFRA to override other legal mandates, including its own statutes, if and when they encroach on religious liberty. (Emphasis mine)

Simple.  Clear.  Beautifully put.  A judge that keeps his personal feelings about the issues of the day out of the judicial process and follows the law and the Constitution as written instead is a judge that can be impartial in the most important moments in our history when the nation is having particularly heated debates about the best policies the country should enact.

That type of judge brings stability to the courts and makes our nation stronger by protecting our freedoms.  It’s the type of judge Justice Scalia was, and we’re thrilled that he will be replaced by someone committed to the same principle.