Your Voice in the Biggest Abortion Case of Our Lifetime 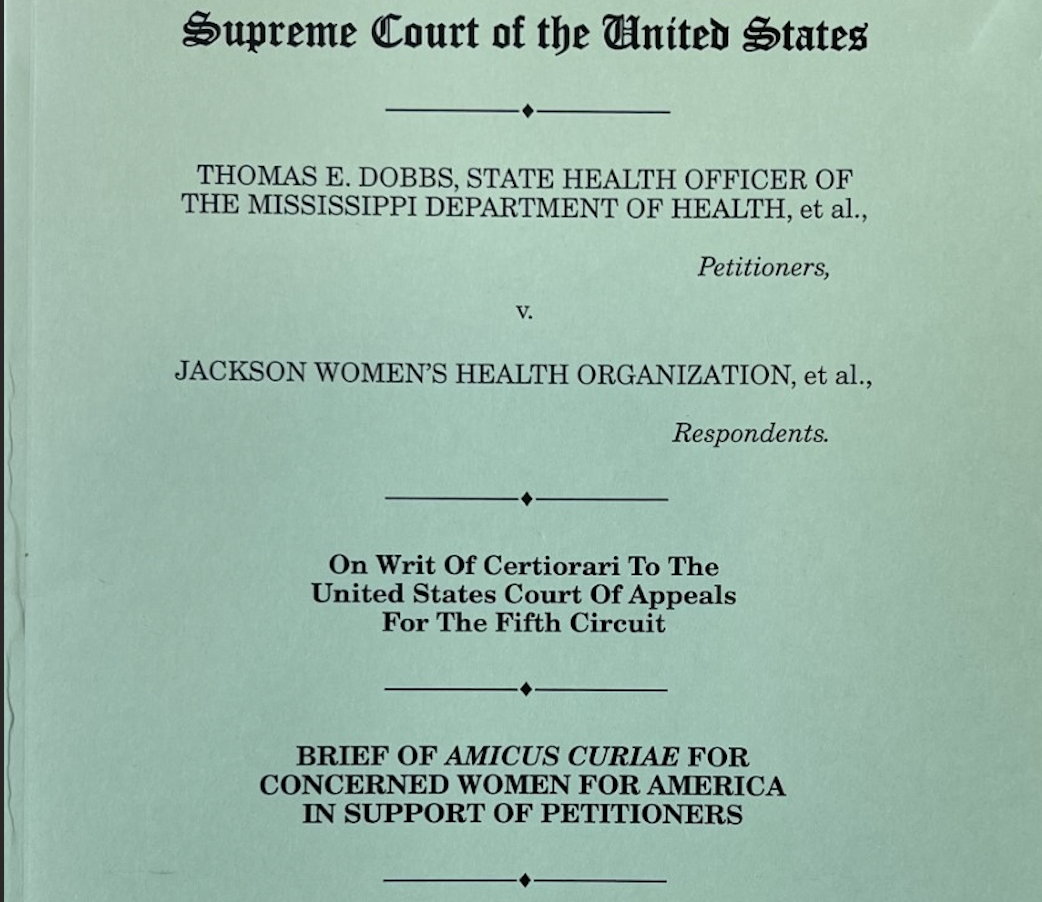 The Concerned Women for America (CWA) Legal Studies Department is proud to report that we have completed your amicus (friend of the Court’s) brief in the Dobbs v. Jackson Women’s Health Organization abortion case before the United States Supreme Court.

From the outset, we let the Court know we are representing you, and we make clear the values for which you stand. “CWA believes abortion harms women, men, their families, and the nation and actively promotes legislation and public education to support women in crisis pregnancies and address the harms caused by pro-abortion policies,” we write on our Statement of Interest. And we conclude saying, “CWA believes it is false to suggest women need abortion to have equality. Moreover, we affirm women are not a monolithic group assenting to a homogeneous worldview on any policy issue so that this honorable Court benefits from hearing and giving value to a broad range of women voices in cases such as this one.” 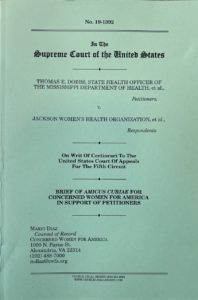 We present three basic arguments: (1) states should be free to make a reasonable determination about abortion policy that places a higher value on the life of mothers and their unborn children, (2) the Court has undervalued the state’s interest in women’s health by failing to give the proper weight to the physical, psychological, emotional, and even spiritual harms abortion has had on women’s lives, and finally (3) the Court should give proper weight to the views of a wide range of women’s voices, including those who reject the Court-created “right” to abortion.

The first argument is simple. The Court’s abortion jurisprudence has no foundation in our Constitution and has therefore been predictably unreliable and inconsistent. We write:

Advances in science and our understanding of the process and interests involved in the abortion decision today should push the Court not only to reconsider the definition and timing of viability but the factual underpinnings from Roe that it left standing in Casey. The time has come for the Court to rectify the constitutional error of Roe’s quasi-legislative analysis. States should never be prevented from presenting the evidence which undergirds their legislative reasoning as they fight to withstand a constitutional challenge to its laws in areas where the Constitution envisions them having ample freedom to engage based on well-established federalism principles.

The lower court, in this case, did not even allow the state of Mississippi to show the scientific evidence on which it relied to enact the law at issue. The state’s interest in women’s health was front and center; therefore, we write of the great injustice of the court barring this evidence, “As a women’s organization, amicus considers the omission of the evidence for the state’s interest in the mother’s health from consideration at the pre-viability stage, for example, a grave misuse of the Court’s jurisprudence that the Constitution in no way prescribes.”

The Constitution’s framework is key to our argument because, though the question before the Court concerns viability, the Court’s abortion jurisprudence problem is much more profound. We conclude: “Though not strictly necessary to resolve this case, the Court’s fundamental problems in this area of law go all the way back to Roe and Doe. To fully vindicate the constitutional principles involved requires an honest reversal.”

Second, we argue, “Women’s interests should never be irrelevant in the abortion context at every stage of pregnancy, including at the pre-viability stage.” Period. “Amicus represents mothers, daughters, sisters, aunts, and friends who have seen the devastation that abortion can have on women’s emotional, psychological, and spiritual lives.” We go on to present some of the studies of the mental health risks associated with abortion and let the Court know, “Any interpretation of viability that forces courts to exclude the consideration of women’s health, not only before choosing to have an abortion but also after that choice, as the lower court decreed here, should not be upheld.”

And finally, third, we go to CWA’s roots. Pro-abortion women do not represent all women. They do not even represent most women. Pro-life is pro-woman. “[A] new AP-NORC poll found that, ‘most Americans say abortions should generally be illegal during the second and third trimester,’” we report, “One would never guess this by looking at the Court’s abortion precedent.”

The hundreds of thousands of women amicus represent want to stress that women do not need abortion as a measure of equality. Women have intrinsic dignity and value, regardless of abortion public policy. The fact that men do not give birth is not something they see as a flaw but a feature of the beautiful way women are created—the imago Dei. Being mothers is not to women’s detriment, despite its many challenges. Women celebrate the diversity of our Creator and therefore affirm our dignity, aside from abortion. Amicus affirms the dignity of every woman, including unborn women.

That is just a sample, but you can access the full document here. We are confident this brief is something you can be proud of, as we stand together before the Supreme Court and proclaim the truth with honesty and respect.

It is an honor to serve you in such a way.