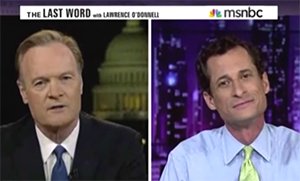 A few weeks back, I had the opportunity to watch the documentary “Weiner.”

It tracks the life of disgraced ex-congressman Anthony Weiner as he tries a political comeback in New York’s gubernatorial race. It is absolutely fascinating, in large part because you get to see Anthony Weiner’s wife, Huma Abedin (who is also Hillary Clinton’s protégé and right hand) trying to handle the horrible circus that is her husband as best she can.

I wanted to write about my impressions after watching the documentary, but other things took precedent, and (I kid you not) I figured Weiner would do something else soon that would give me the opportunity to write about it.

Well, I’m afraid the time has come. Headlines are popping up everywhere that he is, not surprisingly, embroiled in yet another sexting scandal.

If you watch “Weiner,” you will clearly see why I was confident he would do something stupid again. There is no repentance or remorse in this man following his famous scandals. He has no shame. Sure, he regrets getting caught sending lewd messages to several women on Twitter. But everything seems to be a game for this man.

Still, if the reports are true, he has managed to shock me once again. He has gone lower than I thought him capable.