Time to Stop Punishing the Free Exercise of Religion 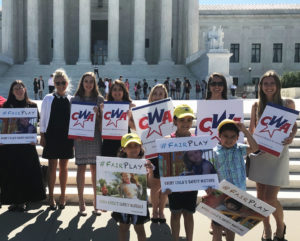 Today at the U.S. Supreme Court, as was the case during oral arguments, no one showed up to support the state of Missouri in the Trinity Lutheran v. Comer religious liberty case.  Concerned Women for America (CWA) was at the courthouse steps early, anticipating a big victory for religious freedom.  And we were not disappointed.

The Court held that the state’s policy of denying religious groups an otherwise available public benefit, solely based on their religious affiliation, violates the Free Exercise Clause of the First Amendment.  The Court said, “[D]enying a generally available benefit solely on account of religious identity imposes a penalty on the free exercise of religion.”

This is a big win for religious liberty and for all Americans, regardless of their religious views.

The facts of the case were simple.  Missouri denied Trinity Lutheran a grant to install playground surfaces made from recycled tires to promote children’s safety, solely because the school was affiliated with a church.  The school had submitted an application to compete for the grant based completely on merit and was found to be in the top 5 out of 44.  Yet, Missouri denied the application stating Article I, Section 7 of the Missouri Constitution.

The Court saw straight through the state’s policy and noted the choice they were putting before Trinity Lutheran: “It may participate in an otherwise available benefit program or remain a religious institution.”

The Court noted that Trinity Lutheran did not seek an entitlement to a subsidy but merely the opportunity to compete on the same level playing field as everyone else.  It noted: “The express discrimination against religious exercise here is not the denial of a grant, but rather the refusal to allow the Church — solely because it is a church — to compete with secular organizations for a grant.”

On this, the state failed miserably. The Court noted it “offer[ed] nothing more than Missouri’s preference for skating as far as possible from religious establishment concerns.”  And it concluded that, “In the face of the clear infringement on free exercise before the Court, that interest cannot qualify as compelling.”

The Court said its decision was plainly compelled by precedent which said that, “To condition the availability of benefits . . . upon [a recipient’s] willingness to . . . surrender his religiously impelled [status] effectively penalizes the free exercise of his constitutional liberties.”

It also emphasized that, “the Free Exercise Clause protects against ‘indirect coercion or penalties on the free exercise of religion, not just outright prohibitions.’”

Justices Thomas and Gorsuch wrote separate, concurring opinions expressing an even broader application of the First Amendment that should encourage defenders of religious freedom going forward.  Those who, like CWA, supported Justice Gorsuch’s strong religious liberty record, should be proud of his clear thinking.  He wrote separately because he, “worr[ies] that some might mistakenly read [a limiting footnote in the majority opinion] to suggest that only ‘playground resurfacing’ cases, or only those with some association with children’s safety or health, or perhaps some other social good we find sufficiently worthy, are governed by the Court’s opinion.”

But as noted above, this was not a “conservative opinion” that would give the enemies of religious freedom any reason to object.  The opinion was joined by Justice Elena Kagan and Stephen Breyer, both from the liberal wing of the Court.

Only Justices Sonia Sotomayor and Ruth Bader Ginsburg showed themselves to be so radical in their jurisprudence that they would have upheld Missouri’s hostility toward religious people.  It bears mentioning that they stand all alone in their assessment, as even the state of Missouri had reversed course, even before the case was over, and allowed the school to compete.