Thoughts on the Gorsuch Announcement 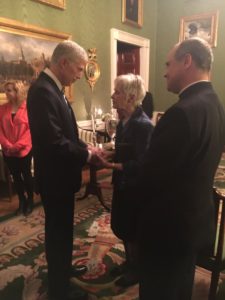 A few quick thoughts on tonight’s announcement of Judge Neil Gorsuch being nominated to the U.S. Supreme Court.

1. This is an impressive nominee.

As we studied the 21 names on President Donald Trump’s nomination short list, Judge Gorsuch shone for his impressive academic credentials, his meticulous writing style and his commitment to the Constitution as written, in full rejection of the liberal manipulation of the so-called “living, breathing,” document.

His involvement in the Hobby Lobby and Little Sisters of the Poor cases against the Obamacare contraceptive mandate shine bright on his resume.  In discussing the Religious Freedom Restoration Act (RFRA), he emphasized that the law “doesn’t just apply to protect popular religious beliefs: it does perhaps its most important work in protecting unpopular religious beliefs, vindicating this nation’s long-held aspiration to serve as a refuge of religious tolerance.”

The opinion shows a deep understanding, not only of RFRA but of the Constitution and our country’s foundations.

In today’s climate of increasing hostility towards religious liberty, Judge Gorsuch’s strong sense of the law would be an important guard for our liberties, as was Justice Scalia for so many years.

President Trump promised someone in the mold of Scalia and he delivered; there is no question about that.  He was proud to have done that, so yes, he gloated a bit.  He said, “I am a man of my word.  I will do as I say … Today, I’m keeping another promise to the American People by nominating Judge Neil Gorsuch to the United States Supreme Court …”

It’s okay, he earned it.

Then came the most moving part of the whole proceeding when he paused to recognized the widow of Justice Antonin Scalia who was in the audience for the occasion.  “Also with us tonight is Maureen Scalia,” he said, “a woman loved by her husband and deeply respected by all.  I’m so happy she is with us.”  A heartfelt applause from the audience followed.  I appreciated the President’s thoughtfulness as I saw her choke up as she received the acknowledgment from the crowd.

Then he quickly moved to allow Judge Gorsuch, who was accompanied by his wife, speak (that is he didn’t bore us with a long speech of his own) “Judge Gosuch, the podium, sir, is yours,” He spoke less than ten minutes.

3. Judge Gorsuch Humble Remarks Said a Lot About Him

His words on Justice Scalia were comforting for those of us who appreciated the late justice and who believe his judicial philosophy must endure for our liberties to be safeguarded against today’s attacks.  Judge Gorsuch said:

The towering judges that have served in this particular seat of the Supreme Court, including Antonin Scalia and Robert Jackson, are much in my mind at this moment.  Justice Scalia was a lion of the law.  Disagree or agree with him, all of his colleagues on the bench shared his wisdom and humor.  Like them, I miss him.

I’ll have more thoughts on Judge Gorsuch’s record and accomplishment in the days to come.  Concerned Women for America (CWA) is committed to ensuring a fair process, even in today’s extraordinarily hostile environment, so stay plugged in here to ConcernedWomen.org for the latest and to see what you can do to help confirm this Scalia-like judge to the Supreme Court.