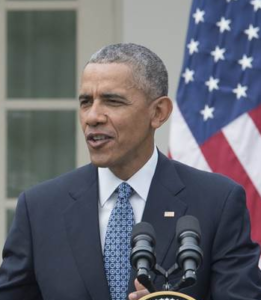 Using government force to bring about liberal policies at any cost seems to be one of President Obama’s favorite past times.  One of his latest moves has been to try to force schools, under the threat of losing vital government funding, to open their restrooms so that transgender students and school workers can use the bathroom, locker room, shower, or overnight facility of their choice.

Parents, of course, are overwhelmingly opposed to such a crass violation of their son’s and daughter’s privacy rights in order to be politically correct.  Not to mention the grave safety concerns that arise with such a policy.

This is why the Obama Administration tried to implement this directive in direct violation of the law, by bypassing any and all rule-making requirements established under the U.S. Constitution and laws.  This policy never went through Congress and wasn’t even open for comments from the general public, as is required before any new agency regulation is implemented.

No, the Obama Administration simply used the Department of Justice to threaten schools with a letter that reminded them they could lose their federal funding if they did not comply.

In a letter to schools, they argued that since the Civil Rights Act of 1964 prohibits discrimination based on sex, that includes discrimination based on gender and, therefore, transgender rights.  This, of course, is nonsense.  It is obvious that the Civil Rights Act was only meant to deal with biological sex.  Title IX, which actually provided for equal, separate bathroom facilities for boys and girls, is explicitly clear on that regard.

But “We the people” are fighting back.

Judge Reed O’Connor, of the Northern District of Texas, granted that injunction, writing, “[T]he Constitution assigns these policy choices to the appropriate elected and appointed officials, who must follow the proper legal procedure.”  The Administration, on the other hand, sought to circumvent that procedure with this scheme, bypassing all the accountability required by law.

Another 10 states: Arkansas, Kansas, Michigan, Montana, Nebraska, North Dakota, Ohio, South Carolina, South Dakota, and Wyoming, sued in federal district court in Nebraska.  In a statement, Nebraska Attorney General Doug Peterson expressed similar concerns as the other 13 states. “The recent action by these two federal agencies [the Departments of Justice and Education] to require showers, locker rooms, and bathrooms be open to both sexes based solely on the student’s choice, circumvents this established law by ignoring the appropriate legislative process necessary to change such a law. It also supersedes local school districts’ authority to address student issues on an individualized, professional and private basis.”

That last point is really important.  This whole war against common sense on the part of President Obama was completely unnecessary.  There is no transgender problem in schools.  Local school boards are able to deal with these issues as they arise, and it seems like providing a private facility to any transgender student is the most sensible solution, as opposed to violating the privacy rights of the overwhelming majority of students.

But this issue is not about common sense or sincere accommodations.  In their minds, it is about tearing down “stereotypes” and forcing everyone else to recognize transgenders as they wish to be recognized.  Their “happiness” is contingent upon your acceptance.  Therefore, they insist that you violate your conscience and/or deep religious beliefs in order for “true equality” and “acceptance” to happen.

Virginia is the 24th state fighting this issue.  That case was halted at the United States Supreme Court when Chief Justice John Roberts, and Justices Clarence Thomas, Anthony Kennedy, and Samuel Alito were joined by liberal Justice Stephen Breyer to grant a temporary injunction that blocked a decision by the Fourth Circuit requiring Virginia schools to allow transgenders to use the bathroom of their choice. The Supreme Court will likely decide whether to hear the case this fall.

Let us keep this matter in prayer as it continues to make its way through the courts.