[LBB] The Left’s Hostility Towards Religion 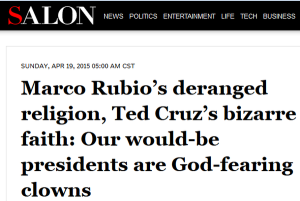 I do not want to link to the article, because I do not want to send traffic to their horrible publication, but I want you to be aware of a certain turn we are seeing in our culture. The left’s hostility towards religion continues to grow every day. With every move they make against religion (particularly against Christians), like the demagoguery used to defeat the various state Religious Freedom Restoration Acts (RFRA), the left is emboldened and tries something even more radical.

Enter the extremely radical, leftist blog Salon.com, which had this headline on Sunday: “Marco Rubio’s deranged religion, Ted Cruz’s bizarre faith: Our would-be presidents are God-fearing clowns.” The article, written by Jeffrey Tayler, a contributing editor at The Atlantic, mocks presidential candidates for “Professing belief in a fictitious celestial deity” and the Word of God as a “magic book.”

The hateful piece is full of lies — one so blatant Salon.com had to acknowledge it, writing an editor’s note which read: “The April 19 story ‘Marco Rubio’s deranged religion, Ted Cruz’s bizarre faith’ included statements attributed to Ted Cruz’s father that turned out to be false. The story has been corrected. Salon regrets the error.”

The author apparently dreams of a day when our president would not use what he calls “the vilest of stock phrases ‘God bless America!’” He wants Americans to “grow up and realize that, barring interference from forces of nature beyond our control, everything we humans achieve, or fail to achieve, depends on us. There is no hope, save in ourselves.”

But in promoting his views, as a good, typical atheist, Mr. Tayler must espouse a special kind of hatred and disdain towards all who dare to have hope in God. Such is the way of the darkened mind. It works non-stop to promote its darkness, and we must be aware and make others aware as well.