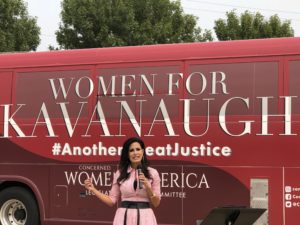 The left came “guns blazing” in opposition of Judge Brett Kavanaugh, President Donald Trump’s nominee to the U.S. Supreme Court, but it has struggled to come up with a reason why.

Oh, they hate him. Sen. Cory Booker (D-New Jersey) said those who do not oppose Kavanaugh are “complicit in the evil.” The very day President Trump made his announcement, Minority Leader Sen. Chuck Schumer (D-New York) said he would, “oppose Judge Kavanaugh’s nomination with everything I have.” Several others immediately followed suit.

Sen. Kamala Harris (D-California) said, “Kavanaugh represents a direct and fundamental threat to that promise of equality, and so I will oppose his nomination to the Supreme Court.” Some senators did not even wait for the announcement to oppose whoever the nominee was. Here was Sen. Bob Casey (D-Pennsylvania) before the announcement, “I will oppose the nomination the President will make tonight because it represents a corrupt bargain with the far Right, big corporations, and Washington special interests.”

We saw this everywhere. The media-celebrated “Women’s March” sent out their press release opposing “XX.” No need to know who the nominee is; he or she would “further erode protections for almost every marginalized group in America.” Some rallied in front of the Supreme Court with pre-made signs for any nominee they thought possible. The official Twitter account of the Democratic Party reportedly put out a tweet (then deleted it) saying, “Let’s be clear: A vote for #KavanaughSCOTUS would be a vote to rip health care from American families …” only it featured the wrong judge in the picture.

They are outraged. They are mad. At whom? At whomever…

Click here to read the rest of this column as featured in CNS News.