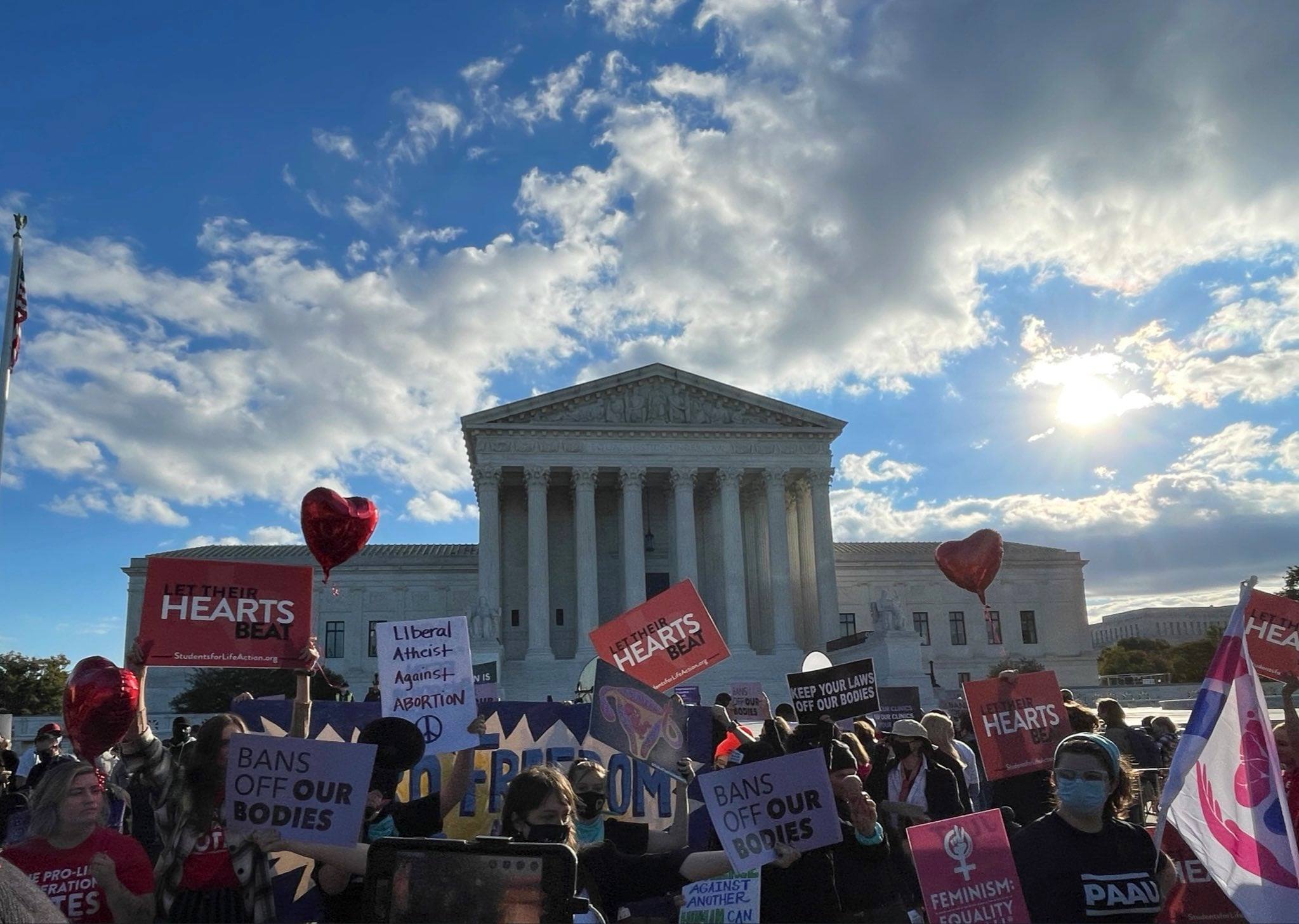 Texas Abortion Law Cases at the Supreme Court—What was it All About?

On Monday (November 1, 2021), the Supreme Court of the United States (SCOTUS) heard oral arguments in two cases (Whole Woman’s Health v. Jackson, and United States v. Texas) challenging the Texas Heartbeat Act (S.B. 8). The law prohibits most abortions after a heartbeat can be detected through an ultrasound.

Other laws around the country have tried to do this only to run afoul of SCOTUS’ arbitrary viability line which makes a law unconstitutional in the Court’s view.

The Texas Heartbeat Act is unique because it explicitly prohibits any state law enforcement from enforcing the law. Instead, it allows any private citizen to bring a civil suit against anyone who performs or helps someone obtain an illegal abortion.

Because of this, abortionists cannot simply sue state officials, as they usually do to prevent the implementation of this law. And that is the question before the Court in Whole Woman’s Health v. Jackson, “whether a State can insulate from federal-court review a law that prohibits the exercise of a constitutional right by delegating to the general public the authority to enforce that prohibition through civil actions.”

This has confused many people because popular media outlets love to fixate on the “war on women” and the abortion narrative. But I hope you can see by the question presented how the issue before the Court is not really about abortion. We have a fundamental disagreement about abortion being a “constitutional right,” obviously. It is not. Still, the legal question, as presented, could be about any other constitutional right.

This is why even some of the more constitutionally faithful justices expressed concerns about the law. Justice Brett Kavanaugh asked about an amicus brief filed by the Firearms Policy Coalition that argued that a similar law would be used against Second Amendment rights in liberal states. He said, “[I]t could be free speech rights. It could be free exercise of religion rights.  It could be Second Amendment rights. If this position is accepted here, the theory of the amicus brief is that it can be easily replicated in other states that disfavor other constitutional rights.”

Justice Clarence Thomas asked about the concern that those bringing the suit have apparently suffered no injury, even though they will be awarded monetary relief. “[U]sually, when you think of traditional torts, there is a duty, there’s an injury to the individual. It’s a private matter. There is no requirement here that there be an injury to the plaintiff.”  To this, the Texas Solicitor General Judd Stone rightfully answered that the Texas Supreme Court does, in fact, require an injury in fact, even if none is explicitly asserted in the text of the law. But Justice Thomas struggled to find the injury, “So what would that injury be in this — under S.B. 8, if it’s an injury in fact?”

Those attacking the law had serious difficulty making their case, too. SCOTUS has strong precedent which restricts a federal court’s power to enjoin state judges. That is why the pro-abortion side sought to enjoin state law clerks. However, this seemed artificial and unenforceable ultimately. Justice Samuel Alito expressed the skepticism this way:

“[A] clerk performs a ministerial function. Somebody shows up with a complaint, wants to file a complaint, and assuming the formal requirements are met, the clerk files the complaint. The clerk doesn’t have the authority to say, you can’t file this complaint because it’s a bad complaint. I mean, what if the judge, the presiding judge in a particular jurisdiction, said, okay, fine, you don’t want the clerks filing these things, if anybody shows up with an S.B. 8 complaint, call me and I’ll docket it myself? Then what?”

In United States v. Texas, the question was related, but it had to do with the federal government’s power to obtain injunctive or declaratory relief against state officials to stop the enforcement of a law, like the Texas Heartbeat Act. And if the effort of the Texas abortionists to obtain such a relief is difficult, this one seems even more problematic under the federalism principles embodied in the U.S. Constitution.

Justice Neil Gorsuch stressed the unprecedented nature of the United States’ request by pointing out it would be the first time in the nation’s history that the Court would grant such a request:

Justice Gorsuch: “General, are you aware of a precedent that permits an injunction against all persons in the country or the world, the cosmos, who bring suit?

There are novel legal concepts to consider in both these cases for sure, but ultimately this is a problem of SCOTUS’ own making by its underlying, unconstitutional overreach when it comes to abortion. Texas and other states simply continue to try to find ways to save babies within the limits imposed by law. The Texas Heartbeat Act is said to have been saving 150 babies a day, thousands by now. And that is a good thing, no matter how you look at it.

That is why Concerned Women for America (CWA) stood with the people of Texas and Attorney General Ken Paxton, who has been a champion for life, on the steps of the Supreme Court on the day of oral arguments. And we will continue to do so until the day the Court acknowledges the error of its ways and restores justice for the unborn. We are praying that day is very close.