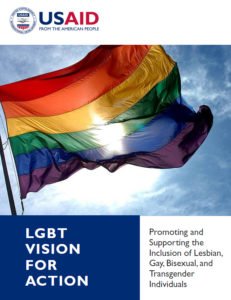 In the beginning, God made man and woman in His own likeness—two distinct sexes each with unique and special characteristics—and declared His creation “good”. Who could have anticipated that this God-given and inherent identity of gender and sex would be so debated, twisted, and redefined by the liberal left today? Even more incredible is that the U.S government under Obama-era policies, not content with promoting multiple gender and sexual “identities” within the U.S., spends millions of tax dollars promoting Lesbian Gay Bisexual Transgender Inquiring (LGBTI) cultural acceptance into foreign countries under the guise of “gender development” and “human rights”.

As Americans, regardless of whether or not we agree with a person’s sexual or gender “orientation”, we strongly believe in supporting the human rights of all people around the world and applaud the efforts of our government in this regard. That is, the right of a people to seek fulfillment of their basic needs, to feed and clothe themselves, to fully participate in society, and to be defended against human rights abuses such as violence, killing, wrongful discrimination, and false imprisonment. To be clear, we strongly support any programming which condemns the abuse of people who identify themselves as LGBTI and which builds the capacity within countries to treat all people equally and with human dignity.

However, currently the U.S. Department of State and U.S. Agency for International Development (USAID) promote LGBT cultural and social acceptance within foreign countries through taxpayer-funded programs that extend far beyond the context of basic human rights. Rather, these programs encourage the exploration of gender and sexual identity, and promote multiple identities/orientations as a “progressive” value. These programs are backed by a political agenda begun during the Obama Administration and continue today in spite of the differing viewpoint of the Trump administration.

Recently, Concerned Women for America met with a Trump-appointed USAID senior official to express the concern that these programs contradict the priorities of foreign assistance and damage our relationship with foreign peoples. We base are concern on four main points:

As was explained to CWA during the meeting at USAID, many of these programs have been left over from the previous administration and will remain until their contract runs out. Simply put, just because a new administration takes office, it does not mean that current programming will immediately expire or change. However, CWA wants our constituents to be aware of how foreign taxpayer dollars are currently spent and to know that we are monitoring the progress of the potential change in the focus of U.S. development aid and foreign relations. For example, the State Department’s Bureau of Counterterrorism is currently seeking a nonprofit to “explore gender identities of boys and men in Kenya”, stating that men being “tough, heterosexual, aggressive, unemotional, and achieving” increases their vulnerability to joining groups of Islamic extremism. [3]

Concerned Women for America urges our government to strongly oppose human rights abuses against LGBT communities but also to no longer entangle U.S. tax dollars with LGBT cultural issues overseas through U.S. embassies, schools, and international programming. We ask that our tax dollars be redirected toward objectives that focus more clearly on U.S. foreign diplomacy and developmental goals. We ask that our “gender empowerment” tax dollars be used to promote policies and programs which best support the rights and wellbeing of females around the world. Last, we ask that State and USAID-funded programs be representative of the majority of the values and beliefs of Americans and of the foreign cultures which we support.

The following is only a small part of LGBT activist efforts on behalf of the U.S. government. According to the Obama White House Fact Sheet from June 2016: [4]

Currently, USAID supports a large number of field- and Washington-based programs and funding avenues that are LGBT-specific or LGBT-inclusive, including within schools in developing countries.  These programs are based on the principles written in the 23-page USAID policy document titled “LGBTI Vision for Action.”[5] A few examples are: