Obama’s Hollow State of the Union 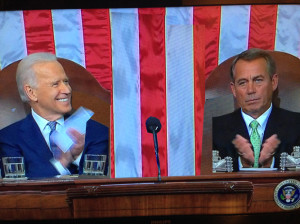 There was something about the young Senator from Illinois coming to the scene talking about changing Washington and bringing the country together that was really appealing, even to those who disagreed with his policies.  What a contrast to the man who showed up to deliver the State of the Union Addressed last night.

One word captures it: empty.  He was talking but every word seemed to need a full forensic examination to decipher what He was really saying.  We simply cannot trust this President anymore.

Peggy Noonan’s preview of the speech a few days ago seemed prophetic.  Hollow.  No one is listening.  And I was trying to listen.  Intensely.  To no avail.

He started with the stories and it just felt fake.  For every one of those cherry picked stories, we’ve heard of thousands hurt by this President’s policies.  And those go unaddressed.  Things are great apparently.  Baloney.

“Tonight, this chamber speaks with one voice,” he said.  Seriously?  You, Mr. President, who continually demonize Congress and showed up the Supreme Court in that embarrassing State of the Union address after the Citizens United decision? You want to speak of unity?

Then manipulated numbers on the economy.  “Lowest unemployment rate.”  Come on.  We are living right here in the America you are describing to us.  We are hurting.

The joke of the night came very early when the President said with a straight face: “As President, I’m committed to making Washington work better and rebuilding the trust of the people who sent us here.”

One must think that the President is counting on those who do not follow his policies to buy that type of rhetoric.  Because to those of us paying attention, it’s sad.  Trust.  He wants to talk trust and he didn’t even mention the IRS, or Benghazi, or “If you like your plan, you can keep it.”

His use of “And if Congress wants to help…” was more like him, but it is more of what Americans are tired of.  More of the condescending tone that has wounded Washington, almost killing bipartisanship under his Presidency.  The President cannot, he will not, lead with strong character and vision.  With inspiration and by example.  He will go at it alone.  He has a pen!  He is the President.

Well good luck with that.

If you are one of the nuns of the Little Sisters of the Poor for example, he doesn’t care if he pushes you to violate your conscience or to go out of business.  Equality!  All women must follow our liberal policies if they want to be counted.

How great it would have been if the President would have come out with a plan to accommodate conscience rights and religious liberty under Obamacare?  No, he prefers to take the Little Sisters of the Poor to court and to cripple their ministry with fines.

And marriage equality, sexual orientation, global warming, etc.  The debate is over!  If you don’t agree you are simply ignorant (not to mention a racist bigot) and must be dealt with as a real threat to America.  He’ll act alone on that too!

But he didn’t help the President.  President Obama ran out hope a long time ago. He tried  to rally at the end with the sergeant’s story, but his words were being filtered as I felt asleep.  Guess we’ll wait for the fact checkers.