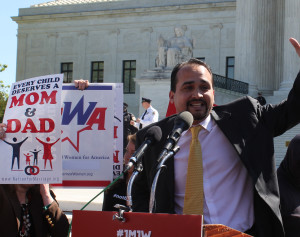 I come before you today with words of hope; for “I know in Whom I have believed.” Others might come to the U.S. Supreme Court or to the government looking for hope, but we are in no need of such a thing.  We already have hope.  Therefore, we come bringing hope and perhaps a warning that when we deviate from truth for the sake of political correctness disaster looms ahead.

And if the Justices are prepared to dispense with reality to invent a constitutional requirement of same-sex “marriage,” despite what the text of the Constitution says, our human experience, and the dictates of conscience, they should be fully aware that there will be consequences stemming from their foolishness.

But when we stand on the side of truth, we have nothing to fear.  We can stand boldly.

That was what the great Abraham Lincoln tried to get at when he said:

Sir, my concern is not whether God is on our side; my greatest concern is to be on God’s side, for God is always right.

So be encouraged! We stand under “a great cloud of witnesses” — men like our Founders who knew that it is truth that sets men free … who believed we are all “created equal,” “endowed by [our] Creator with certain unalienable rights.”

People like Martin Luther King, Jr., who told us he stood with St. Thomas Aquinas in saying that:

We stand with the likes of Frederick Douglas, who said:

I have one great political idea. … The best expression of it, I have found in the Bible. It is in substance, “Righteousness exalteth a nation; sin is a reproach to any people.” This constitutes my politics — the negative and positive of my politics, and the whole of my politics. …

You can go all the way back to Paul and the apostles, to Jesus, to David, yes, you may go back to the beginning.  Isn’t it interesting that the Fifth commandment is, “Honor thy father and thy mother”?  It could have said, “Honor thy parents.”  But it doesn’t, because it acknowledges the “laws of nature and of nature’s God.”  That every child would do best with both his father and mother’s unconditional love.

It is a simple concept. That truth is easily seen apart from the political correctness of the same-sex “marriage” debate. The government’s own research shows the many problems we face because of fatherlessness, especially for boys.

Seventy percent of juveniles in state-operated institutions come from fatherless homes. Sixty-three percent of youth suicides are from fatherless homes.  Fatherlessness negatively affects children’s education, behavior, and health; they are impacted in virtually every area of their lives.  The late Chuck Colson called the link between fatherlessness and crime “undeniable.”  But somehow we forget all that on this specific issue.  When it comes to same-sex “marriage,” the culture demands that we forget truth.

But we stand under “a great cloud of witnesses” who stood on that truth at great peril to themselves.  How can we do any different?

Marriage pre-dates our constitution; it pre-dates America.  It was established by God.  All of history testifies to the truth we proclaim today: that the man, woman, children model of the family is one of the bedrocks of civilization.

Therefore, since we are surrounded by such a great cloud of witnesses, let us lay aside every weight and the sin which so easily entangles us, and let us run with endurance the race that is set before us, looking to Jesus, the author and finisher of our faith, who for the joy that was set before him endured the cross, despising the shame, and is seated at the right hand of the throne of God …

… looking over all of us and the proceedings inside the courtroom today.