Looking Back on the Life of Christian Patriot, Tim LaHaye 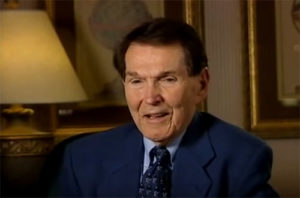 We lost a great one this week; he passed away, surrounded by his loved ones.

Born on April 27, 1926, in Detroit, Michigan, Dr. LaHaye was an Air Force veteran who loved the Lord and his fellow men. He served as a pastor of Scott Memorial Baptist Church in San Diego for almost 25 years, where it grew to three locations.

Dr. LaHaye’s ministry and writings tackled a wide variety of issues, including marriage, sexuality, the family, the will of God, Jesus, secular humanism, and of course, Bible prophecy, among many others. His insights into the meaning of Scripture and its application to the way we live have been invaluable for millions of Christians.

His impact on public policy debates was significant, helping to establish numerous organizations like the Institute for Creation Research, the American Coalition for Traditional Values, and the Coalition for Religious Freedom. He has also been recognized for his contribution in establishing the Moral Majority, alongside Jerry Falwell, and the Council for National Policy.

His voice inspired many to live out their faith in public policy, and many of the Christian policy thinkers today owe their position and voice to a movement that was started by God through servants like Dr. Tim LaHaye. It is hard to think about President Ronald Reagan’s victory without the efforts of Dr. LaHaye and other religious leaders of the time.

We should all be grateful for Dr. LaHaye’s willingness to accept God’s call in this area where so much harsh criticism is part of the overall process. We would never be able to tell where our nation would be today if we had not had voices like that of Dr. LaHaye to sound the alarm against disobedience to Biblical principles. To disparage it today because of our current travails would be an incredible injustice and a foolish mistake.

But all those accomplishments do not do justice to the man that he was. He was a loving, humble man; a spiritual man. He was ready to help others at every turn. And he was unafraid to proclaim Jesus in the most hostile of environments. I praise God for his courage.

His kindness and encouragement towards this author, even as a young “nobody” trying to serve God through Concerned Women for America, the ministry led and founded by his wife of over 60 years, Dr. Beverly LaHaye, is a small example of his big heart. I came to CWA 15 years ago as a young radio producer, and Dr. Tim LaHaye took the time every time I met him to give me great advice and encouragement. I was honored by his endorsement of my first humble attempt at a book, “Be Spent: Winning the Fight for Freedom’s Survival.”

He will be incredibly missed, even as we rejoice at his welcome into the Father’s arms.

We are also grateful that Dr. Tim LaHaye’s voice will continue to reverberate through his work for years to come. That call to Christ, to repentance, and to the joy of God’s forgiveness for us as individuals and for America as a nation will continue to be proclaimed through Dr. LaHaye’s writings, as it was determined from eternity.

His legacy will also live on through his four children, Linda, Larry, Lee, and Lori, his nine grandchildren, and his fifteen great-grandchildren.

He was blessed. And he blessed. We can all learn a great deal from his wonderful example.