Longing for King in the Times of Sessions 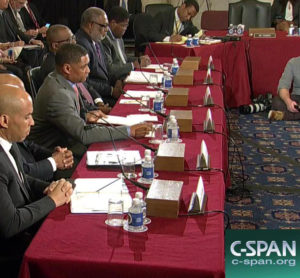 This Martin Luther King Jr. Day I couldn’t help but look at the increased racial tension in our nation and feel a deep longing for Martin Luther King Jr.’s voice. I have written before about how uninspiring most of today’s civil rights leaders are and, unfortunately, they keep getting worse, not better.  One need only look at the events surrounding the nomination of Sen. Jeff Sessions (R-Alabama) to be the next U.S. Attorney General to confirm that.

Last week, the top civil rights leaders in the country decided to embarrass themselves at the Senate Judiciary hearings on the nomination, and it was worse than advertised.

The young, new Chairman of the Congressional Black Caucus, Rep. Cedric Richmond (R-Louisiana), whose voice we were hoping could seek “justice and reconciliation” once again, as MLK’s famous commitment card for the movement made clear, was especially egregious.

The first concern on his mind as he leaned forward to the mic to testify against Sessions was (drum roll please) the fact that he was testifying in the third and last panel of the hearings. Here are his exact words:

I struggle to come up with words that can accurately describe what I felt in that room hearing a man who has been charged with such a great task as leading the Congressional Black Caucus whine about he, “a representative,” being made to testify on the last panel.  And then implying that it was because of the color of his skin.

My mind went to the dramatic moment on the day before, when Sen. Sessions’ wife was in tears at the hearings as he recounted the unjust attacks against him.  The contrast was startling: humility vs. arrogance, respect vs. contempt, seriousness vs. spuriousness.

Just to highlight the absurdity of Rep. Richmond’s charge, there were three “panels” total.  The first was just Sen. Jeff Sessions.  The second panel, which apparently is the one Rep. Richmond objects to (or maybe he wanted to be side-by-side with the nominee on the first one — the claim would be just as absurd), included five minority voices out of nine witnesses: Oscar Vazquez (Hispanic), Peter Kirsanow (African-American), Amita Swadhin (Indian-American), Cornell Brooks (African-American and the head of the National Association for the Advancement of Colored People (NAACP), we should note) and Larry Thompson (African-American).

What does Rep. Richmond’s statement say about those people?  He’s somehow more representative of the black community than the head of the NAACP?

I even took the time to check Rep. Richmond’s written testimony to see if someone had just pre-written something for him and he just went with it without realizing what he was saying.  But his written testimony did not include the disgraceful claim.

Whatever the reality was at the hearings itself (the reality being that most of the testimonies came from minority voices (11 to 5, including Sessions)), Rep. Richmond truly believes what he was saying (that Sen. Grassley, since he is the chairman and controls the order, was discriminating against him because of the color of his skin) and was bursting with such indignation about it that he had to say it for the record.

Being in the room, I can tell you it was also the view of those who came to support Rep. Richmond, Rep. John Lewis (D-Georgia) and Sen. Cory Booker (D-New Jersey).  This line was one of the very few that got an audible, “That’s right!” heads nodding and even claps from some supporters.

The entire third panel was composed of African-Americans for and against Sen. Sessions.  But the contrast between the two sides of testimonies could not be more striking.  Those against Sessions spoke of abstract concepts with little reference to Sessions’ record or their personal experiences with him.  Rep. John Lewis gave a great civil rights testimony, it was just incredibly thin, almost completely devoid of any actual evidence against Sen. Sessions’ record.  Here’s the flavor of his entire testimony:

I was born and raised in the heart of rural Alabama — not very far from where Senator Sessions grew up. In fact, I am only a few years older than Senator Sessions. He was born in 1946, and I was born in 1940. In those days, there was no way to miss the chokehold of discrimination and hate that was rampant throughout our state. Segregation was the law; it ordered the society of the Deep South.

It was moving.  None of us can or want to take away Rep. Lewis’ experiences; they are valuable to the entire country and painfully real.  Sen. Sessions talked about having learned from the civil rights violations of that time, too.  He said:

I deeply understand the history of civil rights and the horrendous impact that relentless and systemic discrimination and the denial of voting rights has had on our African-American brothers and sisters. I have witnessed it.

Rep. Lewis should be celebrating that.  It would serve MLK’s goal of reconciliation much more than the empty character assassination of a good man for political gain.  That serves to only incite and promote the deepening of wounds already inflicted.

Sen. Booker’s testimony was just as empty.  In just three pages, he dismissed Sen. Sessions’ 40-plus years of service.  But it seemed clear to everyone why he was there.  “Cory Booker Lays Groundwork for 2020 Run at Jeff Sessions Hearings,” read the Time headline.

That makes sense, because his shallow, unprecedented testimony was completely unnecessary as far as the Sessions’ debate.  It added absolutely nothing.  Not to mentioned it was hard to believe, given that he was praising Sessions not too long ago, saying he felt “blessed and honored” to work with him to honor civil rights advocates.

By contrast, the testimony of those in favor of Sen. Sessions came from people who had decades of personal experience working with him.  No abstractions.

William Smith, who Sen. Sessions hired as the first black chief counsel to the Senate Judiciary Committee, summarized it well:

I’ve traveled across the state of Alabama with Jeff Sessions. … I’ve watched him prepare for hearings.  I’ve debated him on legislative matters.  I’ve written speeches for him.  I’ve made speeches on his behalf.  I’ve been on every political situation with him.  Sen. Sessions is unquestionably qualified for the job for which he’s been nominated.

He is a good Christian man and a good family man.  He is a man who has dedicated his life to public service.  And in the course of that, he’s actually fought for the disenfranchised.  He fought for citizen reform, and not only did he fight for it, he accomplished it.  He fought for civil rights.  He prosecuted members of the Ku Klux Klan, and most importantly, he’s fought for the liberty of all Americans regardless of the color of their skin or their personal beliefs.  This is the way it should be.

After 20 years of knowing Sen. Sessions, I have not seen the slightest evidence of racism, because it does not exist.  I know a racist when I see one, and I’ve seen more than one, but Jeff Sessions is not one.

Similar testimonies of those who knew him best filled the room on each panel and gave credence to the fact that this was not a single instance but the very life of the man many were trying to malign for political gain.

The shameful actions of those who opposed Sessions based on baseless racial innuendo was vicious — to the point that I overheard one prominent Congressional Black Caucus member accuse Mr. Smith of only testifying in support of Sessions because he was “looking for a job.”

It was the most racist comment I heard throughout the two days of hearings.