Sen. Durbin owes every member of the GOP Senate and Loretta Lynch herself a public apology for insinuating racism is the reason she is being held, for that is exactly what he is saying. 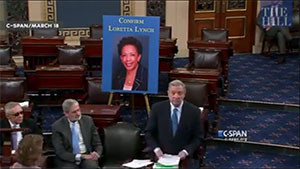 Back in 2003, leaked memoranda from Democrats singled out the highly qualified judicial nominee Miguel Estrada as “dangerous” specifically because of his race. “[H]e has a minimal paper trail, he is Latino, and the White House seems to be grooming him for a Supreme Court appointment,” Democrats wrote. Sen. Dick Durbin (D-Illinois) had no problem with his party’s leadership then.

Neither did Sen. Durbin find anything wrong with filibustering Janice Rogers Brown, who had been nominated to the U.S. Court of Appeals for the D.C. Circuit, where she became the first black woman to serve. He voted twice against cloture motions on her nomination.

But now, the minority whip has decided that the GOP is putting Loretta Lynch at “the back of the bus,” because they will hold her nomination until Senate Democrats vote on an anti-sex-trafficking bill. The reasons they are refusing to vote on that are outrageous on their own, but Sen. Durbin’s insinuation on Loretta Lynch should be repudiated by all his colleagues.

If the media held Democrats to the same standards as Republicans, they would be making a big deal about these comments, even going to the President for comments, as they do to every potential GOP nominee on embarrassing comments by any Republican.

Sen. Durbin owes every member of the GOP Senate and Loretta Lynch herself a public apology for insinuating racism is the reason she is being held, for that is exactly what he is saying.

Check out the shameful comments from Sen. Durbin on the video below via The Hill: