By Mario Diaz, Esq.October 7, 2015News and Events, Sanctity of Life 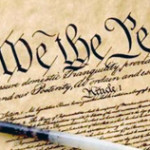 Big abortion is scared.  Planned Parenthood and its cohorts have been exposed by the recent undercover videos by the Center for Medical Progress (CMP) showing how the abortion giant is profiting from the sale of the organs of aborted babies.  Ever since the first video came out, they have been doing all they can to suppress the evidence by using all the influence they can muster.

They went to court, pressured reporters, called in their biggest political allies to downplay the videos, and even decided to spend some serious dough on a high-profile crisis management public relations firm. No prohibition against spending taxpayer dollars on that.

The goal all along has been to limit the number of people who can see the horrifying videos.  Ignorance is bliss when it comes to abortion.

That is why the National Abortion Federation (NAF) also went to court in the northern district of California to try to suppress CMP from releasing some undercover videos of NAF’s annual meetings.  Again, big abortion thrives in obscurity.  The less people know about abortion, the better.

NAF went before Judge William H. Orrick (an Obama appointee), hoping he would help them prevent CMP from not only releasing the video to the public, but from giving it to Congress, which had subpoenaed the recordings for its own investigation.

Thankfully, Judge Orrick refused NAF’s request, saying, “Congress has the power to investigate, and it is not up to the courts to go beyond the narrow confines of determining that the committee’s inquiry is in its province.”

The denial is important, in light of ongoing concerns about the usurpation of the separation of powers between the three branches of government, especially as it relates to what I and many legal thinkers view as an out-of-control judiciary.  Judge Orrick appears to recognize that writing, “importantly in our Constitutional system, there are three equal branches of government, and courts should refrain from creating needless friction with a coordinate branch of government.”

Judge Orrick is to be commended.  It is obvious he is sympathetic to NAF’s vision of life.  At one point he writes about the “violence against providers of abortion care. …”  There is hardly a more sympathetic way to write about abortion.  And he also went out of his way to say that anything CMP provides to Congress must also be provided to NAF and the court.  But the fact that he exercises judicial restraint, despite his ideology, shows an understanding of the proper role of a judge.

Read more posts like this one on the Legal Blurb Blog at CWA’s Legal Studies page.

Mario’s first book, “Be Spent: Winning the Fight for Freedom’s Survival,” is schedule for release this month.