Guess Who Voted to Confirm Gorsuch in 2006? 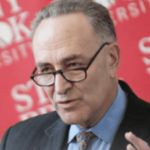 As we engage on the confirmation of Judge Neil Gorsuch to the Supreme Court and we start seeing the left struggle to make the case against yet another decent, well-qualified, mainstream nominee, I will be posting regularly with daily insights into the happenings here in the nation’s capital.

I hope you’ve had a chance to read our press release on Gorsuch and some initial thoughts on the announcement.  Gorsuch is a solid, conservative choice who should be confirmed swiftly and unanimously, as Scalia was back in 1986.

But we live in different times now, and the left is already launching politically motivated attacks at this stellar nominee.  One Democratic super pac produced a 78-page dossier, calling him “too extreme for the Supreme Court.”

We are far removed from even 2006 when this collection of “right-wing extremists,” who are apparently “not sensitive to civil rights,” not committed to “core constitutional principles,” and who want to “roll back women’s progress,” (note: this is what they say about everyone) voted for the confirmation of Neil Gorsuch to the Tenth Circuit Court of Appeals:

Senators in the latter part of the list are still serving today.