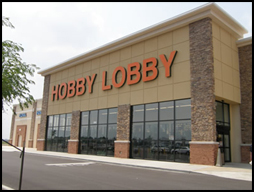 8:30 a.m.
As I walked up to the Supreme Court this morning, all I could do was think and pray.  “Today is a BIG day,” I whispered to myself.  With each step I took up the marble steps, anxiety started to build.  There was so much at stake.  Hobby Lobby, a faith-based family business has argued that the Obama Administration and its HHS Mandate undermines the Religious Freedom Restoration Act (RFRA), a federal law passed under President Clinton which is designed to protect the religious freedom of all Americans.  Today, that freedom was on the line.  In those last quiet moments before the majority of protestors came out and the cameras went live, the Lord spoke softly.  He replaced my doubts and each of the “what ifs” that were bouncing around in my head with two words, a simple truth: “I AM.”  I needed that reminder of the Lord’s sovereignty.  No matter what decision came, I knew we stood on the side of righteousness — the side of eternal VICTORY — the side of the great “I AM!”

9:45 a.m.
Hundreds now gathered … chants grew louder … momentum grew stronger.  Each side held their ground, lifted their signs, and raised their voices!  “It’s like two armies lining up for war,” I thought to myself.  It was a bit of an exaggeration, perhaps, but there was a nugget of truth inside that analogy.  One side claimed religious liberty and life as fundamental, inalienable rights never to be infringed upon and believed that “HHS’s contraceptive mandate substantially burdens the exercise of religion.”  Conversely, the other side held that only “persons,” not corporations, should be granted protection of their First Amendment rights.  This was a battle — a battle of ideals.  Indeed, two competing philosophies of government and morality stared at each other, face to face.

10:30 a.m.
The time had come.  Interns sprinted across the Supreme Court, ready to pass off the majority opinion like Olympic relay runners.  I knew the verdict was in!  The 5-4 decision that followed was more than a win for Hobby Lobby.  The opinion of the court raised religious freedom and individual liberty.  It also showed that bossy regulations that overreach and undermine our most sacred rights will not be tolerated in this nation.  Our side cheered in celebration!  In the words of Justice Ginsberg, it was a “decision of startling breadth,” though for us, that was a good thing.

Grateful for the news we heard today, and hopeful for future victories of tomorrow, I echo Paul’s words when he wrote:

“Thanks be to God, who gives us the VICTORY through our Lord Jesus Christ. Therefore, my beloved brethren, be steadfast, immovable, always abounding in the work of the Lord, knowing that your labor is not in vain in the Lord,” (emphasis mine; 1 Corinthians 15:57-58).

Indeed, history was made!  It was, no doubt, a landmark victory worthy of praise.  Yet our work is not done; this is only the beginning of reclaiming and reestablishing the principles of life and liberty in our land!  As young people from across the nation began to cheer “We…Are…The Pro-life Generation!” my heart was full.

Today, we celebrate victory. Tomorrow, we tighten our boots (and heels) and keep marching forward for faith, for families, and for freedom!

Kaylyn Caruso is part of the Class of 2014 for Concerned Women for America’s (CWA) Ronald Reagan Memorial Internship Program. To find out more about becoming an intern at CWA, click here.