Democrats Pull Out Their Ace on Garland 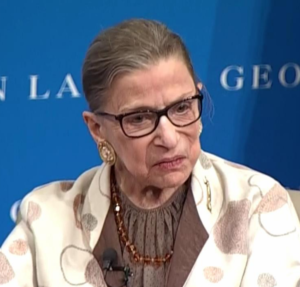 It is not Vice President Joe Biden.  Let me get that out of the way.  On the issue of the nomination of Judge Merrick Garland to the United States Supreme Court, Vice President Biden is the Democrats’ liability, not their ace.

The New York Times does report, “Joe Biden to Lead New Push for Senate Vote on Merrick Garland,” complete with a press conference on the Hill and all, but that’s all as he would say, “malarkey.”  It’s the old magician’s distraction to focus our eyes away from the real action.

As has been reported many times before, Biden is the chief architect and best advocate of the Republican position on the Garland nomination.  The Times itself had to admit that, even while trying to spin it as best they could.

No, the Democrats have brought out the big gun this time — their best advocate, their most respected voice, their chief lobbyist: Supreme Court Justice Ruth Bader Ginsburg.

Ginsburg told a group of students at Georgetown University Law Center that lawmakers should appreciate that a president can appoint justices anytime during his term.

“The president is elected for four years, not three years, so the power he has in year three continues into year four,” she said. “And maybe our members of the Senate will wake up and appreciate that that’s how it should be.”

Yes, ladies and gentlemen, this Democrat operative’s distinguished position gives her a powerful voice to bring unprecedented pressure for the Senate to move on the nomination.

The beautifully coordinated comments come exactly at the right time when Democrats are launching a new push to make this not only a nomination battle but an election battle.

This, of course, is a great motivator for the veteran Democratic Lobbyist Justice Ginsburg.  She’s been clear all along that she believes Donald Trump is a “faker.”  She’s ready to move to New Zealand, if he wins, apparently.

So she’s doing everything she can to help elect Hillary Clinton, and supporting the efforts to make the nomination of Judge Garland a campaign issue is part of that effort — not to mention a great push, they hope, for Democrats to take back control of the Senate.

If she succeeds, Ginsburg (D-New York) can sleep well knowing the Court will be in the good hands of other Democratic operatives like herself.

Now, don’t worry.  I can feel some of you are getting all excited about the inappropriateness of it all.  I know you are thinking these comments are completely unethical on the part of a Justice of the Supreme Court, but you’re just jumping to conclusions.

Just ask other Democrats and you’ll realize there’s nothing wrong with this.  On the Trump comments, Rep. Xavier Becerra (D-California) said, “… I think in this case, we’re talking about comments made by an individual in this country who has a right to speak, and it did not impact any particular case that’s come before her. So I think we can move on.”  And fellow New Yorker Rep. Joe Crowley (D-New York) said, “I think what the sitting justice said was just obvious to every American.”

And for those conservatives complaining, Ginsburg can simply release a statement regretting the comments, deploy the mainstream media’s misdirection trick, and all will be well.  Nothing to see here (except for the next “outrageous thing” Trump says). Can you believe that?