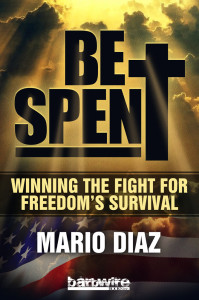 New York Times best-selling author Dr. Tim LaHaye praised the work, saying, “Be Spent is both educational and inspirational. Mario Diaz writes in a style you will enjoy.”

Mario Diaz does us a great service by calling us back to the beautiful idea of ordered liberty. If the prophet’s gift is to remind us of “known but forgotten things,” as the poet Marion Montgomery said, then Be Spent is profoundly prophetic.

We know our Lord can make something good out of any evil, but sometimes we wonder what good He could have brought out of the attacks on life and family and now religious freedom. It is, of course, the great coming together of His children who have largely put aside our differences in order to fight for life and faith and family. Mario Diaz is such a fighter, and the Lord’s spirit permeates this very fine book on our current travails.

CWA CEO and President Penny Nance, who wrote the foreword of the book, said:

Be Spent represents Mario’s sincere passion and life. The public can expect an honesty and realness that is seldom seen today. I hope Be Spent ignites in readers the same passion Mario has for seeing God’s principles restored in our land. I stand with him in saying that freedom’s survival depends on it.