Bottom Line, The Right Thing Will Happen: Gorsuch Will Be Confirmed 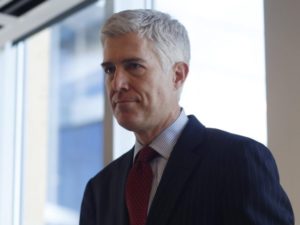 The 24/7 media cycle made this much more dramatic than it needed to be, but the bottom line is Judge Neil Gorsuch will be confirmed as the next Justice of the Supreme Court.

The radical left was mad about many things (Trump, Garland, etc.), but their objections to Judge Gorsuch never passed the laugh test.

So, as predicted, the majority of the Democrats (though not all) foolishly and unnecessarily decided to deploy the first partisan filibuster in U.S. history.  But it was all for nothing, his confirmation will go through to the final vote.

Penny Nance, Concerned Women for America’s CEO & President, said, “The left needs to respect the American peoples’ choice in November and start listening to their constituents instead of special interests.”

The senate, therefore, is scheduled to have the final vote on his nomination on Friday, following the 30 hours of required debate.  That will put the vote, sometime around 7:00 p.m. (earlier if Democrats yield back time).

This development also opens the door for Judge Gorsuch to be seated on the court for oral arguments in a couple of weeks (the week of April 17) when some important decisions will be heard, including a very important religious liberty case.

Let us pray for Judge Gorsuch as he prepares to very quickly deal with such important issues.