Big Win for Freedom of Speech in NIFLA v. Becerra 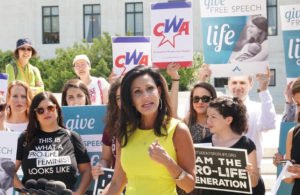 The concurring opinion in NIFLA v. Becerra got to the heart of the problem with the California law at issue, which sought to compel pro-life clinics to promote the state abortion services. Justice Kennedy joined the majority opinion in full but wrote separately, joined by Chief Justice John Roberts and Associate Justices Samuel Alito and Neil Gorsuch, to express reservations about “the apparent viewpoint discrimination” inherent in the law, which he considered “a matter of serious constitutional concern.” It is.

The justices take note that the viewpoint discrimination involved in this act “is inherent in the design and structure of this Act.”  This is hardly contestable.  The concurrence noted the California Legislature celebrated the act as “forward thinking.” But Justice Kennedy dismantles the argument with admirable resolve: “[I]t is not forward thinking to force individuals to ‘be an instrument for fostering public adherence to an ideological point of view [they] fin[d] unacceptable.’”

This law was designed to target pro-life clinics, and it is the worst form of First Amendment violation.  As Kennedy wrote, “Governments must not be allowed to force persons to express a message contrary to their deepest convictions. Freedom of speech secures freedom of thought and belief. This law imperils those liberties.”

This is why the only thing somewhat disappointing (though not surprising) in this case, was the fact that the four liberal justices showed willful blindness in refusing to declare the law unconstitutional.

The Court ultimately reversed and remanded the Ninth Circuit decision that found no constitutional concerns with the law. It sends the case back, noticing it likely violates the First Amendment.

The majority refused to establish any kind of “professional speech” exception to free speech protections and noted content-based laws “are presumptively unconstitutional and may be justified only if the government proves that they are narrowly tailored to serve compelling state interest.” This is known as strict scrutiny.

The Ninth Circuit, of course, did not apply strict scrutiny, which is why the case is remanded, but the Court notes that California’s “licensed notice cannot survive even intermediate scrutiny.” Though the state’s purported purpose was to provide low-income women with information about state-sponsored services, the Court said the evidence “demonstrates the disconnect between its stated purpose and its actual scope.”

Not only has California, once again, targeted only pro-life clinics, exempting clinics of differing points of view, but it also has plenty of less intrusive avenues to accomplish their dubious educational purpose.

California also sought to impose an unlicensed notice that required pro-life clinics to promote state services in any kind of advertisement. This was an important part of the case at oral arguments. Justice Clarence Thomas, writing for the majority, exposed the fallacy of the entire scheme:

As California conceded at oral argument, a billboard for an unlicensed facility that says “Choose Life” would have to surround that two-word statement with a 29-word statement from the government, in as many as 13 different languages. In this way, the unlicensed notice drowns out the facility’s own message. More likely, the “detail required” by the unlicensed notice “effectively rules out” the possibility of having such a billboard in the first place.

There, the state of California’s true purpose is revealed: to silence opposing viewpoints. It is why this law is regressive, instead of progressive, as the liberal legislature argued.  Justice Kennedy explains it eloquently:

It is forward thinking to begin by reading the First Amendment as ratified in 1791; to understand the history of authoritarian government as the Founders then knew it; to confirm that history since then shows how relentless authoritarian regimes are in their attempts to stifle free speech; and to carry those lessons onward as we seek to preserve and teach the necessity of freedom of speech for the generations to come.