How the Left’s “Inclusion” Rhetoric Excludes

I have been bombarded by the media pushing a leftist political agenda my entire life.   Since my high school years, when I first noticed their deliberate attempts to push their particular perspective on me, they seem to be getting even more crass and up front in their efforts.

I remember the first time Snapchat got its new update adding magazine subscriptions for users to scroll through, read, and enjoy.  I was kind of irritated that there was only CNN and no other option for news.

This was also around the time that Twitter introduced the discover page and would only display stories from the left’s points of view.  It gets old after a while.  There have been numerous stories of Facebook pushing the same leftist ideology.

The trend continues today, and it seems to be only growing since the election of President Donald Trump.  These social networks seem to be personally invested in defeating the president and conservative values at all costs.

This is not a scientific study, so I am not 100% certain if there has been a measurable increase since then, or if I am just more politically in tune, but I am amazed at the continual efforts of the left to brainwash and influence young adults like me.

Magazines like Cosmopolitan and Teen Vogue specifically and purposely hone in on why women’s health and wellness means I must be “pro-abortion.”  More than once, I have clicked on the Snapchat Cosmopolitan story that seemed interesting, only to discover it was just spoon feeding me the abortion industry’s propaganda. Not only is abortion a choice, it’s apparently the best choice.

Young women and girls today are being influenced across the country from this undeniably exclusive rhetoric.  Teen Vogue recently published an article called “What to get a friend Post-Abortion.”  The end of the article states, “… she will need you — not because the act itself is so terrible, but because sometimes the world can be.”  Nothing wrong with that per se; pro-lifers are often the ones who come alongside post-abortive women.  But the article listed and encouraged gifts like an “F-U-terus” pin.  Lovely.

I wonder if the women writing these articles ever question why an abortion can be so traumatizing.  It is not something to take lightly.

According to one study, an alarming 50% of women who have an abortion show immediate negative responses.  The emotional impact is significant not only for the women but for anyone closely involved with the pregnant mother.

Abortion does not seem empowering to me.  In fact, the entire article proves how discouraging and dismantling it can be for someone.  To feel empowered is to feel accomplished.  What do abortions accomplish?

Does that disqualify me from being a woman?  That’s what these media influencers would like me to believe.  They do everything in their power to silence and shame young women like me by acting as if we do not exist.

What they are discovering, though, is that we will not go away.  Programs, like Concerned Women for America’s Young Women for America, are giving young women like me a voice and the space to express our views in a respectful, thoughtful, intelligent way with those who agree and disagree with us.

This gives us a great opportunity to reach other young women with a message of true diversity and inclusion that allows them to be who they want to be and not who the media elite demands.

Samantha Stohlman is an alumna of Concerned Women for America’s Ronald Reagan Memorial Internship Program. Learn more about this program by clicking here.

CWA of Maine Stands Up for Gorsuch 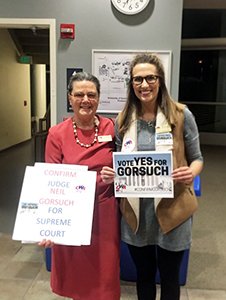 On March 5, at the University of Southern Maine, 600 people showed up for a listening session held by Sen. Angus King to voice their opinions on the confirmation of Judge Neil Gorsuch to the Supreme Court.

Sixty affirmative votes are needed to confirm Judge Neil Gorsuch in the Senate, and Sen. King could be the key vote. Among the crowd were several CWA members joined with Maine’s CWA state director, Penny Morrell, and CWA National Communications Coordinator Janae Stracke.

Sen. King shared that he hadn’t decided which way he was going to vote, but stated he met privately with Gorsuch last week to better understand his judicial philosophy and temperament. The first session lasted two hours, and Sen. King determined that was not enough and added two more hours to the session in order to hear as many Mainers as possible.

The opposition had surely mobilized, but CWA of Maine was your voice to cut through the liberal talking points. 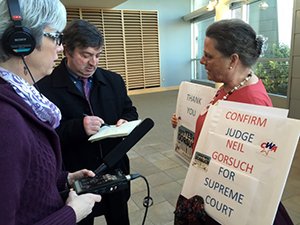 CWA’s own Penny Morrel said, “Antonin Scalia was a strict constitutionalist. He didn’t make laws. … Judge Gorsuch will do the same.” Others joined with her to explain that Gorsuch will be bipartisan and see both sides. Members held signs and wore stickers that represented CWA’s support for Gorsuch. 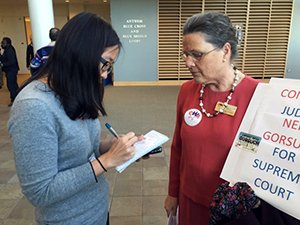 Special thanks to the members of CWA of Maine for coming out and speaking up at the listening session! We’re confident that Sen. King heard our voices, and we will pray that he ensures Mainers get the U.S. Supreme Court Justice they deserve and America needs.