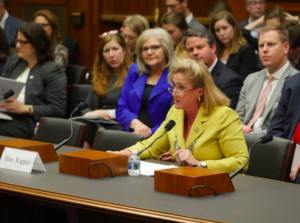 This week the House passed a sex trafficking bill (H.R. 1865) that would allow state attorneys general and victims to sue websites that knowingly facilitate sex trafficking. This bill was created to target sites like Backpage.com, which is currently under Senate investigation because of the hosting of ads that promoted the trafficking of minors. The legislation passed changes Section 230 of the 1996 Communications Decency Act, which the first circuit ruled shields websites from lawsuits over user-generated content.

This bill was a fight from the very beginning. Fortunately, human trafficking is a big issue nationally, and generally, everyone agrees it is a horrid practice that must be stopped. However, this issue has a lot of money surrounding it, and that means there are a lot of anti-sex trafficking groups with a lot of opinions about how this type of legislation should be handled. This issue also touched the bipartisan golden child of Congress: the tech industry. Democrat and Republican leadership are both heavily funded by the tech industry, and, unfortunately, they hated this bill when it was originally introduced, so we had our work cut out for us.

CWA worked with Rep. Ann Wagner’s (R-Missouri) office almost weekly for a year, meeting and strategizing how to get people in D.C. on board with something for which states were asking. The original bill was altered several times to appease not only the trafficking groups, but also was altered per DOJ’s request. When it passed, it was supported by all 50 state attorneys general. The final bill is a reflection of what should happen in Washington. Everyone: groups, congressional Democrats and Republicans, and the administration, worked together (eventually, not everyone was on board initially) to make a stronger and better piece of legislation.

We were not happy with the Senate counterpart for the House bill. It is what I would refer to as a “pat ourselves on the back” bill; it seems like it is accomplishing something, and it sounds really good, but ultimately it was not as strong as the House bill, and we had major concerns. Unfortunately, we were one of the few who did have major concerns with only the Senate language, and many sex trafficking groups loved the Senate language, but we vocalized those concerns and worked with Rep. Wagner’s office to educate members and leadership on why the House bill is better.

H.R. 1865 passed the U.S. House by a vote of 388-25.   The Senate will take up the House-passed bill the week of March 12.  Congratulations to Rep. Wagner who led the charge on the passage of this bill.  CWA worked long and hard on this legislation.  We look forward to seeing it through to passage in the Senate, also.