A Quick Look at Neil Gorsuch 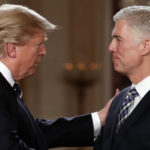 Clerkships: Judge David Sentelle of the U.S. Court of Appeals for the District of Columbia Circuit and, Justices Byron White and Anthony Kennedy at the Supreme Court.

Career before judgeship: Associate, then partner at Kellogg, Huber, Hansen, Todd, Evans & Figel., then Principal Deputy to the Associate Attorney General, Robert McCallum, at the U.S. Department of Justice

Judicial Philosophy:  Similar to Scalia, he is a constitutionalist, who believes the Constitution should be interpreted as written and rejects the liberal proposition of a “living, breathing document.”

On Life: In his book entitled The Future of Assisted Suicide and Euthanasia, judge Gorsuch argued for laws against euthanasia based on the philosophy “that all human beings are intrinsically valuable and the intentional taking of human life by private persons is always wrong.”

On Religious Liberty:  Gorsuch shines most in this area, ruling both in favor of Hobby Lobby and the Little Sisters of the Poor.  He has also dissented or joined several opinions that criticized Supreme Court doctrines that limit religious expression in public spaces, like the Ten Commandment displays (Summum v. Pleasant Grove City, American Atheists Inc. v. Davenport, Green v. Haskell County Board of Commissioners).