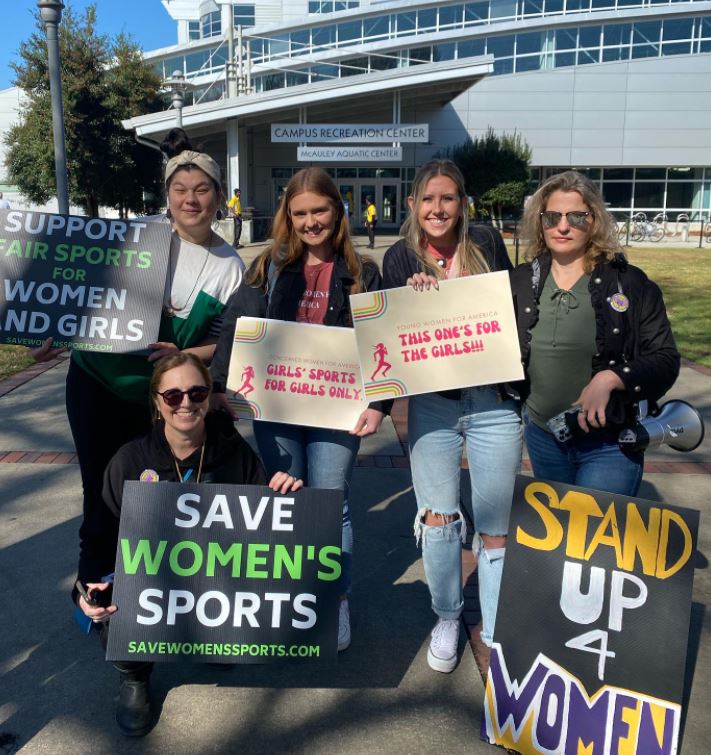 Young Women for America (YWA) was your voice on the ground yesterday in Atlanta, Georgia, at Georgia Tech, where a biological male won the 500 free in the NCAA Division 1 WOMEN’S Swimming and Diving Championship.

On the same day, Concerned Women for America filed a formal Civil Rights Complaint under Title IX with the U.S. Department of Education against the University of Pennsylvania for refusing to protect the rights of college female athletes.

At Georgia Tech, YWA staff, alongside YWA campus leaders from Georgia and Tennessee, cheered on the female athletes competing and showed their support for women’s sports.

At the Save Women’s Sports press conference, Chloe Satterfield, a student at Georgia Tech, shared from personal experience what it feels like to compete against a biological male in female sports, and that as a Georgia Tech student, it is “so disappointing to see my school enable the NCAA to enforce its dangerous policy. The future of women’s sports is at stake, and I urge the NCAA to rethink its decision, consider the irreversible harm that they inflict on their female athletes because of this policy.”

Macy Petty, an NCAA Division 2 volleyball player at Lee University, spoke from her perspective as a college athlete: “In the rules of volleyball, the men’s net is seven inches higher than the women’s net. This height difference has nothing to do with personality, sexuality, identity, or anything other than biological facts. These seven inches were there for a reason because men are born naturally more athletic, and their sport reflects this.”

Just the day before, Macy testified before the Tennessee House Education Administration Committee on HB 2316, a bill that would prohibit males from participating in public higher education sports that are designated for females.

Young Women for America will continue to show up for female athletes and boldly advocate that GIRLS’ SPORTS ARE FOR GIRLS ONLY.