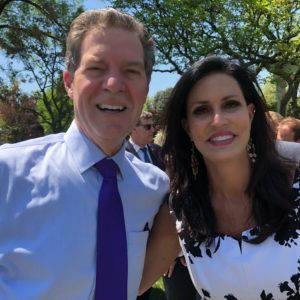 President Donald Trump has taken several steps to protect religious freedom within the Executive Branch during his time in office. On the National Day of Prayer, in his second year in office, he once again showed his commitment to people of faith by signing an executive order establishing the White House Faith and Opportunity Initiative.

This is no small thing, though we have seen similar efforts in the past.  The attacks on religious freedom — and freedom of speech in general — are ongoing, and a proactive approach to protect these rights is desperately needed.

The faith initiative will help design new policies that recognize the vital role of faith in our families, our communities, and our great country.  This office will also help ensure that faith-based organizations have equal access to government funding and the equal right to exercise their deeply held beliefs.

He is absolutely right. One of the sad things about modern government hostility towards religious groups is the fact that they are negatively affecting these groups’ great, charitable, loving work. Remember the attacks on the Little Sisters of the Poor? Why would the government want to hinder in any way the work of these poor, religious women who are caring for the elderly in our nation? Or how about the state governments that have forced out of their state Christian adoption agencies? These are services that are needed, yet as government intolerance of differing views, especially in the area of sexuality, continues to grow, we see many are willing to let the poor and needy suffer at the altar of liberalism.

It was fitting that in announcing this initiative and commemorating the National Day of Prayer, President Trump remembered the loss of “America’s Pastor,” Rev. Billy Graham.  He said:

As we gather this morning, our thoughts also turn to the memory of a man who awakened the light of God in the hearts of millions of America’s pastors.  And that’s the great, legendary, wonderful Billy Graham.  Great, great man …

Today, we remember the words of Reverend Graham, “Prayer is the key that opens [to] us the treasures of God’s mercies and blessings.”  Always beautiful.

As you know, prayer is foundational for Concerned Women for America. Everything we do is done not in our own power, but by the strength and opportunity given to us by God Almighty. It is a reality that we know to be true personally and can attest to throughout our great history. That is why we continually remind our culture of America’s rich history of faith and prayer. President Trump is fully aware of that history.  More importantly, he is very proud of it.  At the Rose Garden ceremony, he said:

The prayers of religious believers helped gain our independence, and the prayers of religious leaders like the Reverend Martin Luther King — great man — helped win the long struggle for civil rights.  Faith has shaped our families, and it’s shaped our communities.  It’s inspired our commitment to charity and our defense of liberty.  And faith has forged the identity and the destiny of this great nation that we all love.

Americans of faith have built the hospitals that care for our sick, the homes that tend to our elderly, and the charities that house the orphaned, and they minister — and they really do, they minister to the poor, and so beautifully and with such love.

We are proud of our religious heritage.  And as President, I will always protect religious liberty.

This is our identity as American, whether many or few recognize it. It is the genius of our nation and the key to liberty and freedom.