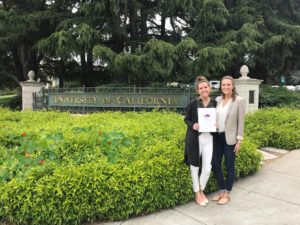 CWA at University of California, Berkeley

CWA’s Communications Coordinator, Annabelle Rutledge, and CWA’s National Field Director, Janae Stracke, were able to set up a meeting with the Vice President of the College Republicans on Berkeley’s campus in Oakland. Anti-Semitism has been on the rise on college campuses, and we had hoped to be a resource to students as they engage their peers in dialogue. This meeting was intended to find out what the greatest need is and to assess what CWA’s role could be.

The student with whom we met has himself been attacked on campus several times and every day has a target on his back for his conservative views. Other students will tweet his location so he can be targeted. He was incredibly grateful and encouraged by CWA’s interest and support.  He was also able to connect us with the only two outspoken conservative professors on campus and students at other universities, such as Stanford and San Francisco State. He invited us to speak at one of their meetings and gave a lot of insight on Berkeley regulations for tabling and demonstrations. We were surprised at how easy it is for groups, even groups not affiliated with the campus, to table on UC Berkeley’s Sproul Plaza. The key to success being large, eye-grabbing banners and pop-ups, a plethora of materials for both hanging up and handing out, as well as support for students who are opening themselves up to persecution from their peers by standing for their beliefs.

CWA on the ground in Montecito, California

Last week our latest Prayer Action Chapter co-leaders, Joy Bohlinger and Naomi Van Wyk hosted an event in Montecito, California, which drew around 50 women from the surrounding area! Each one of these women are God-fearing world changers ready to fight for their values. Each woman has a unique circle of influence—whether it is as the wife of a prominent pastor, connections to Hollywood elites, a background in the policy realm, or a mother in a homeschool group.

We spent time worshipping before showing a few videos and giving them an overview of Concerned Women for America.  We closed the event by going over action items and pouring praying over our country, the state of California, CWA, and the action items shared. Two of the action items discussed were the upcoming Governor’s race and AB 2756.

AB2756 was a bill that would place strict regulations on homeschooling families, including curriculum specifications and required teaching certification for parents, among other regulations. We spent a good portion of time praying over this bill and asking the women to contact their State Assembly members.

The very next day, Wednesday, April 25, in a stunning late-night victory for California homeschoolers and parental rights, AB 2756 was defeated in the Assembly Education Committee.

All of the attendees were also urged to vote in the June 5 primary election, knowing California will only allow the top two candidates on the final ballot, no matter their party.