Victory for the Unborn in Missouri!

On Tuesday, July 25, HCS SB5 was taken up on the Senate floor. We are pleased to report that all went well; the motion to go to conference was defeated, and HCS SB5 was finally passed by a vote of 22-9. It was signed by Gov. Greitens yesterday afternoon. Click here for the Senate Journal for Tuesday, July 25. 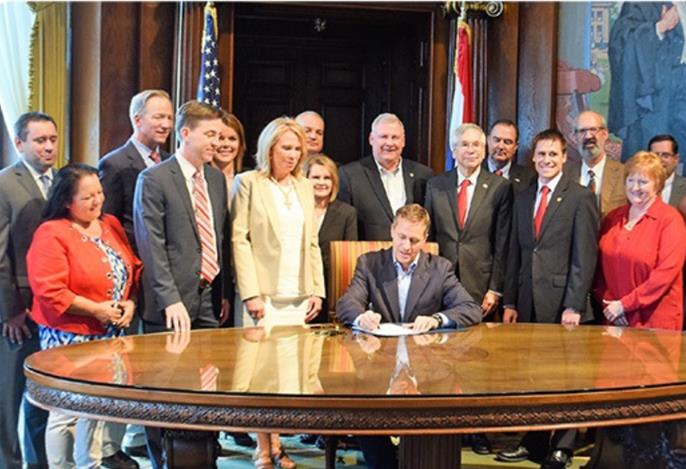 Thank you for responding to our last e-alert on this matter with your prayers and your action!

Take Action: “Thank you” calls and/or emails are now in order.

There were a couple of other Senators who should be noted – Sen. Bob Onder and Sen. Bill Eigel. Both of these individuals joined in much of the afternoon’s debate with Sen. Andrew Koenig excellently articulating the reasons to adopt the stronger pro-life bill the House sent back to the Senate.

Praise: Join us in thanking the Lord for this great victory!

Thank you again for praying and taking action on one of the strongest pro-life bills to pass our Missouri General Assembly in years!

Read on to get a little more detail on Tuesday’s activity on the floor. You’ll want to see how your State Senator voted on each point.

Bev Ehlen, State Director, Gina Allen, CWA of Missouri’s Pro-Life Coordinator, and Vicki Leuther, member of our Legislative Team were in the Senate Gallery watching and praying and posting to Facebook.

There was some drama with a motion to go to conference. That motion failed.

Sen. Koenig offered a privileged motion – Motion for the Previous Question. A senator has to have eighteen senators to sign a petition in order to close the debate (stop a filibuster). Here are the names of the twenty the Senators who signed that petition. A special thank you to them!

The vote to pass the privileged motion which would stop the Democrats’ filibuster of the bill and make it possible to go to a final vote on HCS SB5 was passed. Here are the votes on that motion.

Then the final vote on HCS SB5 was taken and passed by the following vote:

The President declared the bill passed.