Transwomen are just transwomen, not women 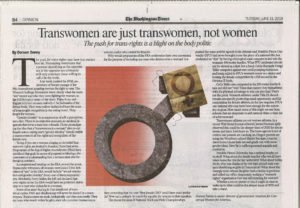 The push for trans-rights is a blight on the body politic.

The push for trans-rights may have just pushed too far. Persuading Americans that a person identifying as the opposite sex is the opposite sex ultimately will only convince those willing to call a lie the truth.

Last week marked the 100th anniversary of Senate passage of the 19th Amendment granting women the right to vote. The Women’s Suffrage Movement knew clearly what the word “sex” meant and who they were fighting for: women, in the full biological sense of the word. These brave suffragists believed women embodied the hallmarks of the female body. They wore yellow sashes and bore the scars of long-sought recognition in the voting booth. They fought for women.

“Gender identity” is an expression of self; a perception, not a fact. There is no objective standard, no medical diagnosis that turns a male into a female. Those promulgating the idea that a “transwoman is a woman” also co-opt female status, saying one’s “gender identity” should entitle a transwoman to all the rights and recognition of the female race.

Today, if you are a woman clinging to the belief that women’s rights are limited to females, I have bad news. Proponents of the Equal Rights Amendment (ERA) have sacrificed that goal. In an era of progressive ideology, the conventional understanding that a woman must also be female is outdated.

Click here to read the rest of this column as featured in the Washington Times.