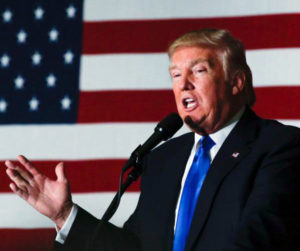 On June 21, I was honored to join about one thousand fellow faith leaders in a private meeting with Donald Trump, the presumptive Republican nominee for President.  Concerned Women for America was both a convener and a co-sponsor of the event.  We believe that there is great value in bringing together conservative Christian leaders from around the nation with the candidate who most closely aligns with our policy beliefs.  As you will read below, the event was successful on many levels, but I wanted to give you a realistic and brutally honest, thorough assessment.  In particular I want to discuss the missing seventh question.

Let me begin with some of the many conflicting thoughts and emotions I have had this election cycle. No one in the meeting expected it to be a theological discussion.  Our moderator, Gov. Mike Huckabee, joked that this wasn’t a pulpit committee trying to hire our next pastor.  No one was laboring under the false notion that Donald Trump is a Bible-banging Evangelical.  As most of you know, I worked hard in my individual capacity to help elect someone who more closely aligns with us from a faith perspective, but alas, that was not to be.  However, it’s important to note that Donald Trump won the primary fair and square and, in the process, secured more votes than any other Republican in primary history.  I understand the issues that many of my conservative colleagues have expressed and what gives them pause in supporting Trump. I, too, find troubling his divisive and sometimes demeaning language.  I don’t like some of what he says, but I don’t like almost everything that Hillary Clinton does.  Everyone has to answer to their own conscience before the Lord, but let’s be honest about what’s at stake.

I do lose patience with the false notion that there is any pathway to elect another Republican.  There is no way a third-party nominee would win, nor is there even a path for creating a third-party candidate at this late date.  Any suggestion to the contrary is simply wishful thinking. Neither is there any realistic delegate play that would somehow magically elect another person at the convention in Cleveland.  I supported others in the primary, but Donald Trump won.  Everyone must come to terms with that fact, and the option now is to support him or not.  I recently told a South Carolina radio host who was grousing about the outcome of the primary that he was going to have to join me in driving to Walmart, buy some giant size big boy pants, put them on and pull them waaaay up.  We may have supported other candidates, but they LOST.  People must face reality and move on. So the question becomes, “Why support him?”  What are his governing principles? Only God knows Donald Trump’s heart, but I doubt he is on the same page as most Evangelicals in his belief in Scripture as God’s inerrant, final word on all matters.  Hillary Clinton would also fail that test.  Her roots are a sect of Methodism that is basically cafeteria-style Christianity, choosing passages of Scripture that they like while denying the authority of those they do not.  It seems that the two candidates have those two things in common.  Our only indication of the future performance of Clinton and Trump are their records and words.  Hillary Clinton has decades of votes and speeches that reveal a candidate in favor of abortion at any point in pregnancy, for any reason, all paid for by the taxpayer.  She has no respect for the rule of law nor for religious liberty. Her foreign policy is as weak and apologetic as President Obama’s. The day that Donald Trump spoke at CWA’s cosponsored Road to Majority Conference, Hillary Clinton spoke to Planned Parenthood.  She is far left by any measurable standard I would accept as real.  Donald Trump has no voting record.  The only way we can judge his fitness for office is his words, which brings me back to yesterday’s meeting.

Now back to the meeting — The day started off with a veritable who’s who of Christian leaders in the room, such as Ben Carson and Franklin Graham.  There were well-known public policy leaders like Gary Bauer and Marjorie Dannenfelser, as well as mega-church pastors like Dr. David Jeremiah.  The tone of the gathering was hopeful optimism.  As a major voting bloc, this was a room full of people appropriately prepared to be charmed and wooed.  Although as organizers of the event we had hoped for a more in-depth give-and-take with the candidate, I am not sure those in attendance had the same expectation.  In the end, they were right.  The day began with a passionate plea from Rep. Marsha Blackburn (R-Tennessee), chairman of the Select Investigative Panel on Infant Lives, to help her get the word out about her Congressional committee’s findings on Planned Parenthood’s nefarious sale of infant body parts – heads, brains, hearts, lungs, tongues – for profit and the $500 million of taxpayer funds being used to prop them up.

Following her was a presentation by famous pollster George Barna reaffirming my own observation that culture is in crisis on many levels, including the fact that by 2050, unless things change, only about one-third of Americans will get married.  Our culture cares only about our own pleasure whether in our church experience or our relationships.  Hard stuff.

At that point in the program, I was asked to join a select number of leaders backstage for a private meeting with Donald Trump.  He arrived late and, after a warm introduction by Dr. Ben Carson, spent a few minutes talking about the need for Evangelical leaders to speak up on the election.  He assured the group that he understood the cultural shift that now has gone from post-Christian to anti-Christian and vowed to work to support our rights.  He lapsed at one point into the glib pol that gets him into trouble by flippantly suggesting we shouldn’t pray for the president.  Again, his understanding of Scripture is minuscule.  The room, again, was warm and receptive after some brief eye rolling; with the exception of that one stumble, he did a great job overall.

Moving out to the main stage, after a wonderful introduction by Jerry Falwell, Donald Trump joined Gov. Huckabee in a talk-show-type format for the Q & A portion of the program.  He was asked six questions.  This number stands out to me, because I was slated to ask question number seven.  The men before me asked pertinent questions beginning with Dr. James Dobson’s question on Court nominees.  As a reminder, there will be between one and four nominations to the Supreme Court and hundreds of lower court nominations from this next administration. (As an aside, there will also be about 5,000 appointed personnel who will be the people who run this country from positions within the agencies and commissions.)  In response to Dr. Dobson, Mr. Trump specifically and wholeheartedly reaffirmed his commitment to only appoint “pro-life” Constitutionalists to the court.  He also added that he may add other names to his original list of eleven possible nominees but that they all will be duly vetted.

Following Dr. Dobson were other questions by Dr. David Jeremiah, Sammy Rodriguez, Tony Perkins, and, finally, Kelly Schackleford.  Both Tony and Kelly asked Mr. Trump about issues in which religious rights of Christians would come into conflict with the  GLBTQ community, basically whose rights reign supreme in cases of a business owner’s right to abstain for making a cake or a military Chaplain’s right to not officiate a “gay” wedding.  In both cases, Donald Trump dodged.  He either did not answer or said it would be decided by the courts.  He rightly pointed out that he was the person, however, who would make the SCOTUS and lower court appointments. Clearly, his appointments would be better for religious freedom.

Trump really shined on two issues: Court appointments and Israel.  I was very gratified to hear him for the first time give a full-throated support for America’s closest ally in the Middle East, Israel.  In the past, he has made statements about “remaining neutral” when, of course, there is no moral equivalency in the right of the Jewish State to exist and defend her people and the Palestinian wish to “wipe Israel off the map.”  This time Donald Trump rose to the occasion, giving a scathing assessment of the Iran deal as “One of the worse deals I have ever seen” and stating that “Obama has forsaken Israel.”  Both of those statements elicited nodding heads and applause.

There were, for me, only two real glaring omissions from the event. First, I would have liked to have heard some of his guiding principles in choosing a vice-presidential running mate.  This appointment sets the tone for all of his other appointments and is, of course as they say, one heartbeat away from the presidency.  A pro-life, social conservative with solid knowledge of both Washington and foreign policy would be a great help to him and a unifying force for the base.

But the second dark spot of the day for me was that he was not questioned directly on the issue of abortion.  I believe him when he says that he has had a pro-life conversion, but what does that mean, especially on funding issues?  This is particularly sad to me because I was slated to be question number seven, and I planned to find out.  I wasn’t given the opportunity to get to the bottom of the issue that I believe is a litmus test for leadership.  So, here is my question.  You judge the worthiness.

Mr. Trump, you are now pro-life, but you say Planned Parenthood “does good work.” What we know about Planned Parenthood is that they are the nation’s largest abortion provider, that 94 in 100 pregnant women visiting them have an abortion, that by Planned Parenthood’s own admission, they perform no mammograms, that they are under congressional investigation for selling baby body parts like hearts, lungs, brains, and tongues, while grossly violating HIPPA patient privacy law, and that all their important, non-abortive healthcare services and more can be served by the 13,000 community health centers which outnumber Planned Parenthood’s clinics 20 to 1.  So, given all these facts, if we deliver it to your desk, would you pledge to sign legislation like Sen. Joni Ernst’s bill, S1881, which simply redirects the half billion dollars in federal funding of Planned Parenthood to these health clinics?

I am still hoping for an answer to this essential question, because to be pro-life, one must be willing to chip away at the institution of big abortion, and the abortion establishment is indeed Planned Parenthood.  There is no doubt in my mind that Donald Trump is much more closely aligned with my views than Hillary Clinton in almost every area.  He has my head, but in order for him to win my heart, I need him to answer the question above.  Please join me in praying that I am able to get the right answer.