The remarks from CWA of Texas State Director, Ann Hettinger, at the Voices for Life event held in the courtroom where the Roe v. Wade case was decided:

How do you comprehend the loss of 60 million lives? 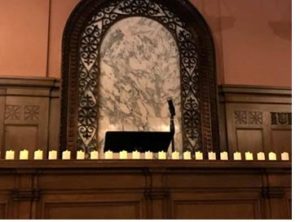 These numbers pale in comparison to 60 million.

In struggling to answer the question “why”, I looked at the judges whose duty it was to deal fairly.  Judge Sarah Hughes, of the three-panel court that made the initial judgement here in Dallas, was the only woman judge involved in the decisions.  After completing law school, she could not find a job because she was a female.  She became a strong female advocate.  Judge Goldberg of the 5th Circuit depended on a prior decision of the Supreme Court that interpreted the 9th amendment to mean that government was to stay out of the affairs of citizens as much as possible.  In the Supreme Court, Lewis Powell had a previous associate whose girlfriend had died from an abortion.  Thurgood Marshall was the first African-American Justice on the Supreme Court and in his realm of reality through his work with the NAACP, he saw many struggling women.  His opinion of the Constitution was that it is a living document meant to respond to societal needs.  William Douglas, William Brennan and Harry Blackmun joined Marshall in his belief in a “living constitution.”  All three were strong advocates against the death penalty.  Chief Justice Warren Burger later recanted his position and wished to see the matter litigated again.

“So what, Ann?” you say.  Zephaniah 3:5 says, “But the unjust knows no shame.” I don’t think we should count on the public at large to care.   II Chronicles 7:14 says clearly, “If my people who are called by My name humble themselves and pray and seek My face and turn from their wicked ways, then I will hear from heaven, will forgive their sin and will heal their land.” Until then, we, God’s people, must work through education and public policy involvement to halt this horror.

Tonight, we will memorialize those 60 million little ones.  I’m asking that you approach the Bar of Justice, take a battery operated candle, please turn it off, and place it in the basket.  As you take the candle, say a prayer that as we work to educate people and love and support them in adversity, that this stigma on our culture will cease. 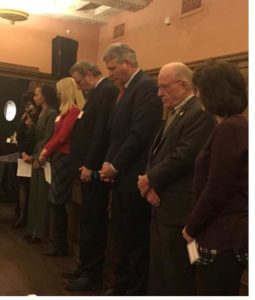 The prayer continued:  Melissa Ferrer, a mother, prayed for young girls in crisis; Joanne Vuckovic, Director of Rockwall Crisis Pregnancy Center, prayed for the workers and volunteers in crisis pregnancy centers; Tom Schlueter, Pastor and Director of Texas Apostolic Prayer Network, prayed for judges and lawyers in the litigation process; Jim Haines, Associate Pastor at First Baptist Church in Dallas, prayed for families in crisis and the pastors who minister to them; Texas Sen. Bob Hall prayed for the lawmakers as they work to write legislation protecting the unborn; Carol Silvage, a teacher, prayed for the teachers in classrooms across America as they struggle to deal with the young women in this culture.