The End of Democracy? 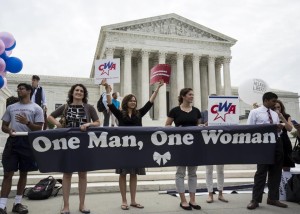 After the Supreme Court decided to redefine marriage by invalidating the votes of millions of Americans who went to the voting booth to protect marriage as the union between one man and one woman, I asked myself, “Does democracy still exist?”

My question was quickly answered by President Obama’s response to the ruling.

“[T]his ruling is a victory for America,” he stated. “This decision affirms what millions of Americans already believe in their hearts.”

His opinion fits the media-created narrative. But the fact still remains that more than half of the states in the nation had voted to protect marriage as the union between one man and one woman in recent years. Even in a liberal state like California, the courts had to intervene to force same-sex “marriage” on the people.

Fast forward to June 26, 2015, where, once again, it was not the people but five justices of the Supreme Court who ultimately decided such a delicate and monumental issue. To make matters worse, they even ignored the Constitution in their ruling.

As Chief Justice John Roberts wrote in his dissent:

“If you are among the many Americans — of whatever sexual orientation — who favor expanding same-sex marriage, by all means celebrate today’s decision. Celebrate the achievement of a desired goal. Celebrate the opportunity for a new expression of commitment to a partner. Celebrate the availability of new benefits. But do not celebrate the Constitution. It had nothing to do with it.”

Nowhere in the Constitution is there a requirement that same-sex “marriages” must be recognized. The strongly worded dissents by Chief Justice Roberts and Justices Antonin Scalia, Clarence Thomas, and Samuel Alito made that very clear. Justice Scalia specifically wrote with concerns about the peoples’ “freedom to govern themselves.”  He said, “[I]t is not of special importance to me what the law says about marriage.” And that is exactly the point, isn’t it?

Same-sex “marriage” is now the law of the land. But that doesn’t mean our religious beliefs are now in the shadows. The Constitution and the First Amendment are still on our side. It’s just the beginning for us as believers. We must now rise and continue to advocate for what God has established marriage to be: the union between a man and a woman.

Our individual beliefs are still valid within the market place of ideas. There are people who are tired of listening to the one side of the argument which society says is the true side on which to be. Continue to speak, because you never know who you might have the chance to influence. That’s how democracy works. “Democracy is very much alive, but it takes a people who are willing to stand up for their individual beliefs … even if they’re in the minority.”