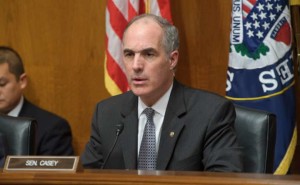 Following in his late father’s footsteps, Sen. Robert (Bob) Casey (D-Pennsylvania) was sworn into office under the promise of protecting the sanctity of life — one of the few from the Democratic Party saying he was willing to defend the rights of the unborn. However, thus far he has failed to uphold the convictions of his original pro-life platform and is now reluctant to protect the innocent life that his late father fought extremely hard to defend.

His father, former Pennsylvania Gov. Robert Patrick Casey, also ran as a Democrat.  Despite pushback from fellow party members, he was a champion in guarding the right to life. He also supported new programs for women’s healthcare as well as a statewide adoption network for children.

His pro-life contributions include the Abortion Control Act that would make certain that parents were notified when a minor is seeking an abortion, ban certain partial-birth abortion procedures, and require “informed consent” and a 24-hour waiting period between requesting and receiving an abortion. One of his most notable pro-life pieces of legislation was the subject of the 1992 Supreme Court case Planned Parenthood of Southeastern Pa v. Casey. Although the Court ruled in favor of the Planned Parenthood clinic, ruling that Gov. Casey’s Abortion Care Act violated the Roe v. Wade decision, it opened the door for Casey’s parental consent and the 24-hour waiting period provisions to be enacted in future legislation.

Read the rest of this article on LifeSiteNews: https://www.lifesitenews.com/opinion/the-casey-contradiction