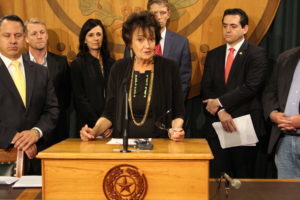 On Wednesday, November 15, 2017, Ann Hettinger, Concerned Women for America (CWA) of Texas State Director, spoke at a Texas Values-sponsored press conference at the state Capitol in Austin.  The occasion preceded the lame-duck hearing in the State Affairs Select Committee on Texas Economic Competitiveness, which is chaired by Rep. Byron Cook, who is not seeking re-election.  In the 2017 regular session and in the special session, the committee refused to hear testimony on The Texas Privacy Act. This bill would have prohibited males in female bathroom and locker room facilities in government buildings. The Texas Business Association alleged that such legislation would be detrimental to Texas businesses, and the committee refused to hear the case based on these accusations. However, studies show unmistakable evidence to the contrary.

During the press conference, Mrs. Hettinger reported on a situation she encountered earlier this year at a hotel conference facility in Austin.  “As the director of a women’s organization, I can tell you for sure that I will not book any event in any place that jeopardizes the comfort and security of my attendees. Businesses will ultimately pay the penalty for ignoring these issues,” stated Mrs. Hettinger.